The Moscow Exchange (MOEX) has just announced its operating income for the first quarter of 2015, increased by 82.4 percent year-on-year to RUB 11.87 billion ($241 million). Earnings Before Interest, Taxes, Depreciation and Amortization (EBITDA) spiked higher by 115.9% to RUB 9.41 billion ($190 million).

Granted, the exorbitant interest rates in Russia have been of much help to the company’s business, however, the management of the Moscow Exchange expects top performance to continue even as interest rates continue normalizing.

The CEO of Moscow Exchange, Alexander Afanasiev, commented in the announcement, “Our diversified business model again drove excellent financial results in the first quarter. Since the start of the year we have seen several successful equity offerings by Russian companies on our market, demonstrating that high-quality issuers can in fact raise substantial capital in the current environment.”

“In April, as interest rates have come down we have also seen the bond market become more attractive for issuers, with growth in new issuance which resulted in higher secondary bond trading volumes. Looking forward, we expect this trend to continue,” he added.

The CFO of the company, Evgeny Fetisov, said, “Today we report the best quarterly results in the company’s history thanks to growth in trading volumes across most markets as well as increased client balances and a supportive interest rate environment.”

“The Group’s business model will continue to deliver strong results in subsequent quarters even as interest rates decline and the share of interest income returns to more typical levels. During the quarter we continued to demonstrate cost discipline in the high-inflation environment, with operating cost growth of only 11.9%,” he added.

According to the announcement made by MOEX, revenue growth for the quarter was driven by higher fees and commissions across all markets, however if we look at the quarter-on-quarter comparison, those numbers are actually lower by 23.5% when compared to Q4 of 2014. The notable exception in fees and commissions is income from derivatives and equities.

Higher fees and commissions from depository and settlement services were a factor, but the net interest income contributed substantially to the growth in operating income. Those number grew over 200% year-on-year and about 66% when compared to the previous quarter. As the Bank of Russia increased its interest rates last December the Moscow Exchange was one of the biggest beneficiaries. 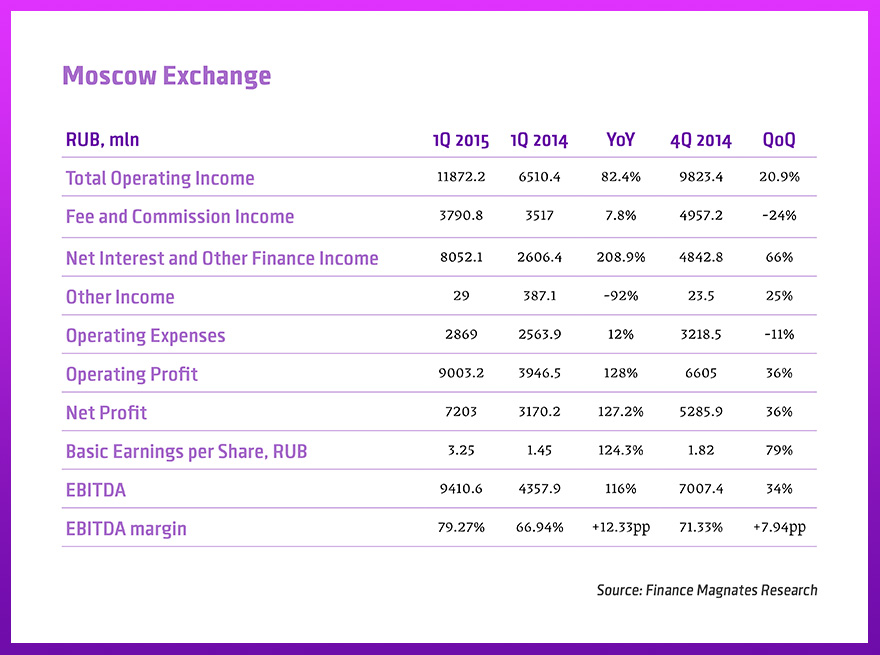