With October arriving, the latest monthly volume reports of trading venues and brokers for September are also becoming available. Among FX ECNs, September trading for both HostpotFX and FastMatch is now available.

During the month, average daily volumes (ADV) fell 3.5% from August to $27.3 billion. The figures were also well below the same period last year, when September 2014 activity was recorded at $38.2 billion.

The month-over-month volume decline occurred even as September marked the end of the summer period. Also, speculation on the fate of the dollar rose in the middle of the month as traders geared up for the US Fed’s monetary policy meeting. However, with August’s increase in FX volumes being triggered by sharp volatility in equities, especially those in China, September’s trading failed to see a sustained carryover from the previous month. 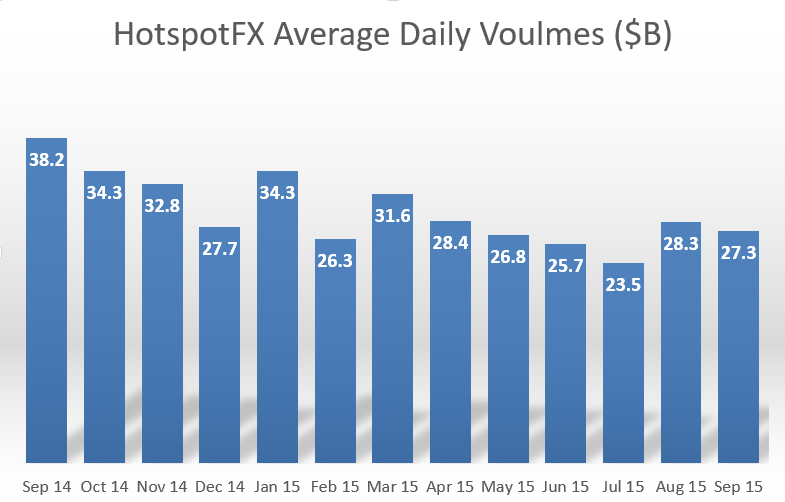 Also reporting monthly figures was FastMatch. During September, ADV was $7.81 billion. Activity was 14.7% below August’s ADVs of $9.16 billion. Of note was the lack of any outsized trading days at FastMatch, where no single day of trading surpassed the $10 billion level. This compares to August which had seven such greater than $10 billion trading days.

Overall, following a drop in volumes in January after the Swiss franc volatility shook the FX markets, FastMatch has been unable to rebound back towards trading levels experienced during the second half of 2014.