Interbroker ICAP has issued August average daily volumes (ADV) for its electronic trading platforms. Overall ADV of its platforms which include FX, repo and fixed income securities was $684.4 billion, over 7% ahead of July’s activity.

In FX, volumes on EBS rose 22% and were back above the $100 billion level to $100.3 billion. The August rebound compared to ADV of $82.1 billion in July, which had been a year low of trading on EBS. The rebound matches a similar improvement that took place at the CME Group and Hotspot of which late month volatility improved August’s overall volumes. 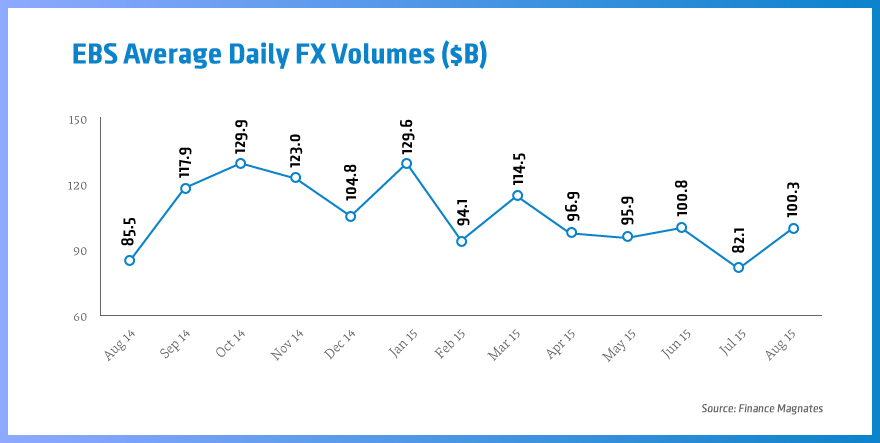 In terms of the CME Group, the exchange reported its strongest volume increases across its Japanese yen contracts. The currency regained its safe haven status as global stock exchanges, headed by China, plunged in the second half of August.

EBS itself is known for having one of the deepest available market depths of FX ECNs for the Japanese yen, often being called a ‘venue of last resort’ for many yen traders. During August, this held true as EBS reported strong yen volumes on August 24th, as well as record volumes in its CNH and Asian NDFs.

Explaining further to Finance Magnates about August’s volumes, Serra Balls, Group Head of Communications at ICAP, told Finance Magnates, “After a relatively slow start to the month, market volatility picked up during the second week of August when the PBOC’s actions took place, impacting volumes in both major and emerging markets currency pairs and record volumes being recorded in both CNH and Asian NDFs. On 24 August when stock markets plunged, EBS saw heavy trading across all major (especially EUR and JPY) and emerging market currency pairs and produced EBS’s highest volume day since 15 January. The uptick in volatility continued through to the end of August. “