Dubai’s energy and commodity futures exchange, the Dubai Mercantile Exchange (DME) has been expanding its member base as Japan’s largest trading firm, Mitsubushi Corp, becomes the 31st member of the exchange.

The DME, the only energy focused executing venue in the region has been going from strength to strength with membership increasing 20% YoY. The exchange has seen keen interest from Asian based brokers, India’s Reliance Industries Limited was a recent addition to the list of brokers.

Christopher Fix, Chief Executive of the Dubai Mercantile Exchange, said in a statement: “DME is delighted to welcome Mitsubishi Corp as a member. Mitsubishi’s decision to acquire a membership is a major endorsement of DME Oman’s position as the new benchmark for crude oil trading for the Asian markets. With the strong support of customers like Mitsubishi Corp, DME continues to move from strength to strength and is perfectly positioned to bridge the rapidly expanding crude oil corridor between the Middle East and Asia.”

Trading volumes at the DME have been showing signs of promise as traders explore opportunities in commodities. The DME oil contract provides traders from Asia a convenient contract that trades at the close of the Asian session and is still active during the European session. Figures reported to Forex Magnates for April 2013 showed monthly and yearly increases for the exchange. Average daily trading volumes (ADV) of contracts in April 2013 was up by just under 1% from the previous month and up by 2% from April last year. April’s ADV of 6,266 makes the past month DME’s second strongest month ever, with physical delivery at 14.7 million barrels. The Exchange also saw record open interest for the end of a month at 20,070 lots.

Tokyo headquartered Mitsubishi Corp has been an active trading firm in the DME’s Oman crude oil futures contract since its launch in 2007. The contract was the world’s third crude oil benchmark. It is the main and sole benchmark for Oman and Dubai crude oil Official Selling Prices, the contract is traded on the Globex platform, the contract size is similar to other Brent contracts at 1,000 barrels. In February this year Mitsubishi Corp was one of the participants that traded the four billionth barrel of crude oil on the DME.

Noboru Kamakura, Crude Oil Dept General Manager, at Mitsubishi Corp spoke about the firm becoming a member of the DME, he explained:“Mitsubishi Corp has been a long-term supporter of the DME and is now excited to increase its involvement. Mitsubishi Corp is proud to support the development of a new fully transparent benchmark for crude oil sales in Asia. The DME offers a level playing field for its participants and provides open access to the price-setting mechanism. The involvement of a wide range of oil market stakeholders ensures a fair price for all market participants.”

The commodity duet, Gold and Oil, have both been trading in wild ranges as commodities are seen as a hedge against inflation and a safe haven in times of economic misery. The CBOE Oil index measures daily fluctuations in the price of oil, similar to the VIX. Although oil has been relatively stable post 2008 peak, in May 2011 the spot price for WTI crude oil fell by 8.6%, consequently the CBOE Crude Oil ETF Volatility Index spiked by 33.5%, the biggest one day % move in the history of the oil volatility index.

The Middle East is host to eight nations with the largest oil reserves according to OPEC, however the region has been slow to create a recognised trading exchange for energy contracts. According to data on the OPEC website, the UAE holds 97.8 billion barrels of oil reserves. 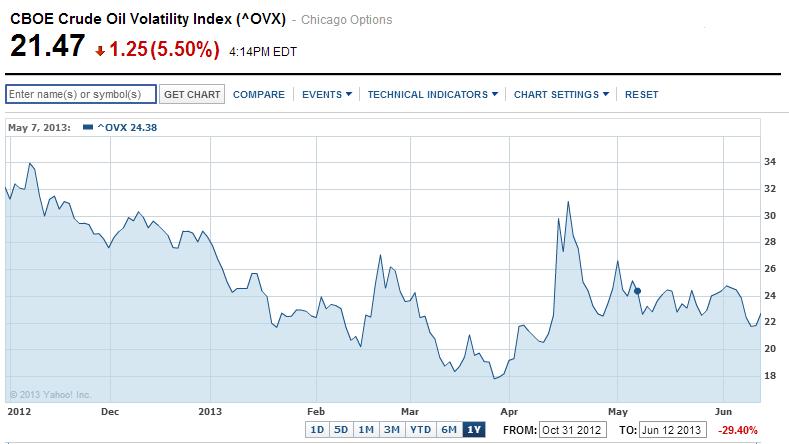