Earlier in the month it was reported that CLS Bank reached a record high in FX trades sent for settlement in its network during September. Over the period, average daily trades were 1,419,102, with a value of $5.94 trillion. The figures were 37.0% and 21.2% respectively higher than August 2014.

Following its initial report, CLS has currently issued its more in-depth review of September’s volumes in its Monthly Market Report. The report uses the Bank of International Settlements accounting. The result is that trades that are double reported due to both sides of a trade sending transaction details to the CLS for reporting, are only counted once. As such, totals from the Monthly Market Report vary from the CLS’s initial volume release.

According to the CLS Market report, FX spot trading was the leading product type during September with average daily volumes (ADV) of $1.03 trillion, a 34.8% increase from August. During the same period, volumes of FX Swaps and Forwards grew by 24.4% and 24.0% respectively to $917 billion and $274 billion. At the same time, average daily trades sent for settlement of FX spot trading grew 44.4% to 635,115. The average FX spot trade size during the month was $1,621,753 versus $1,736,510. The decrease can be attributed to more short-term speculative trades having taken place during the active period.

What was notable about the current spike in trading, were volume increases that took place across the spectrum of currencies. As seen the graph from CLS below, all major currencies saw a substantial increase in activity during September. While trading volume increases typically do affect all FX products positively, currency specific news does often create scenarios of individual currencies greatly outperforming or underperforming the overall market. 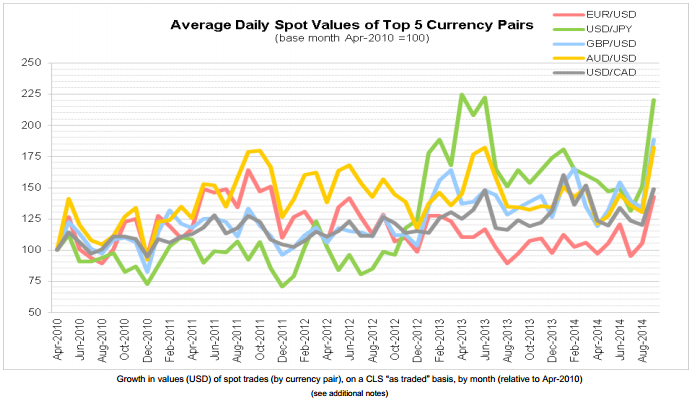