After we wrote that the shock results in the US elections provided incredible trading volumes to online retail brokers, institutional players are now starting to confirm they are seeing the same on their side.

One of the key utilities to the foreign exchange market participants, CLS Group (CLS), just reported it witnessed increased levels of FX trading activity during the announcement of US election results.

The CLS data shows particular spikes in activity between 02:00 – 03:00 GMT when the results for key battleground states were announced, input volumes were 7 times normal levels for that hour.

This heightened activity continued following the confirmation of Republican candidate Donald Trump as the next US president between 08:00 – 09:00 GMT, when input volumes were more than double normal levels for that hour, according to CLS.

Significant spikes were registered across currency pairs between 02:00 and 03:00 GMT, with input volumes ten times normal levels for EUR/USD for that hour, followed by USD/JPY and GBP/USD (nine times and five times respectively). The largest increase in currency pair activity was the US dollar traded against the Mexican peso (USD/MXN), 63 times normal levels for that hour. 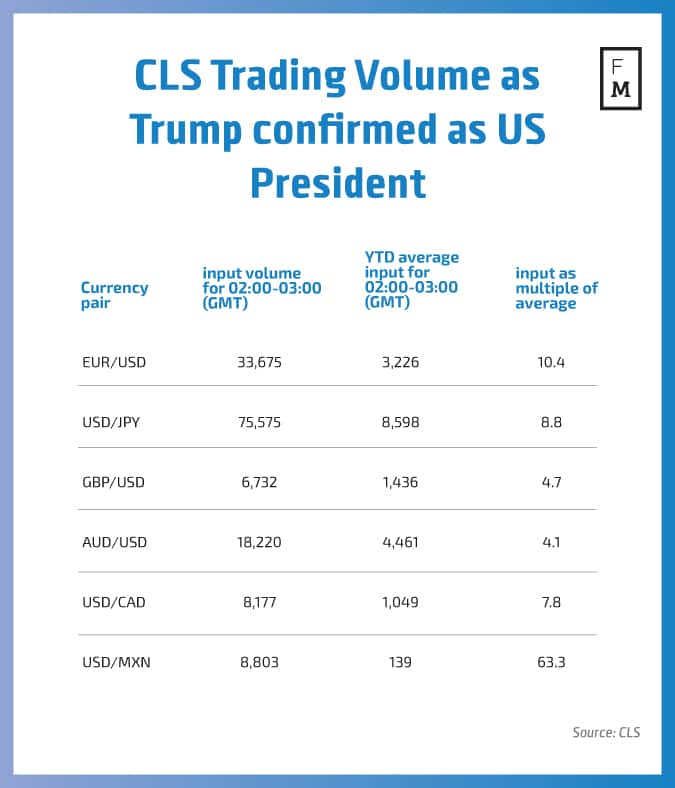