Bloomberg has announced the new target weights for its Commodity Index (BCOM) for next year, in which Brent crude has merited the largest absolute increase. The international benchmark’s target weight in the index will be 7.53 per cent, up from 7.16 per cent in 2015.

In contrast, the US benchmark, West Texas Intermediate (WTI) will have a reduced target weight, at 7.47 per cent, down from 7.84 per cent. This is the first time Brent has been assigned a greater weight than WTI.

The biggest reduction in target weight, however, was in gold, which in 2016 will have a weight of 11.38 per cent, from 11.90 per cent, only to be expected given the prolonged depression on the gold market, with prices at multi-year lows. Still, the precious metal will remain the commodity with the highest individual target weight in the BCOM.

The BCOM comprises six groups of commodities, seen in the table below, with energy accounting for the largest share, at 31.03 per cent. This is less than this year’s 31.19 per cent, but still above the other commodity groups. All in all, Energy, Precious Metals and Softs (coffee, cotton, and sugar) will have a lower target weight in 2016 comparative with 2015, while Grains, Livestock, and Industrial Metals, will have a higher target weight. 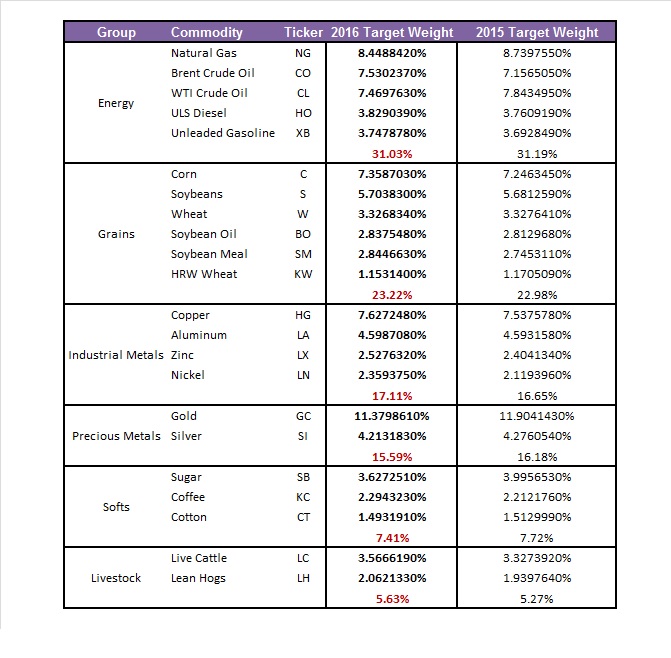 Multipliers will be announced at start of January

The target weights will be used in the calculation of BCOM’s multipliers in 2016, which will take place on the fourth business day of the new year, a Bloomberg statement reads, and will serve as basis for the percentage weights of each commodity in US dollars.

No new commodities will be added to the index in 2016 and no existing ones will be removed.