The start of the holiday season appears to be setting in as the average daily volumes (ADV) of FX trading at both Hotspot and FastMatch declined in November, compared to October’s data. Affecting the month was the Thanksgiving holiday in the US which led to suppressed volumes at both venues last Thursday and Friday.

For Hotspot, the weakness in trading continues what has been a tough several months. During November, ADV was $22.38 billion, 6.7% below October’s trading. On a year over year basis, the results looked even worse, having fallen 31.8% below the same period in 2014, which was part of a string of strong months for the FX ECN.

November’s results marked a multi-year low for Hotspot, and were the lowest monthly results since December 2012. Prior to November, July 2015’s $23.5 billion ADV had been the previous low mark for the year. 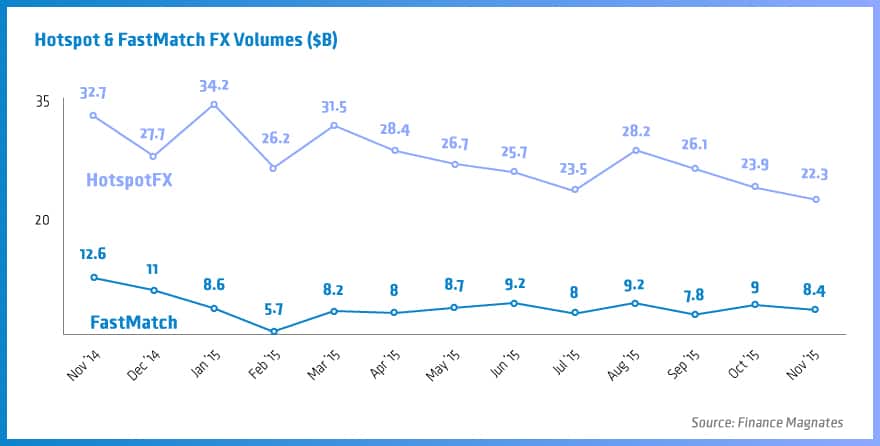 At FastMatch, November’s activity marked the eleventh straight month that ADV are below $10 billion. After ending 2014 on a strong note, FastMatch saw its volumes plunge following January’s Swiss franc volatility. During November, ADV were $8.4 billion, a 6.6% decline from October’s figures and 33% below the same period last year.

Overall for FastMatch, since experiencing a difficult second half of January and February, volumes appear to have stabilized at the ECN. Since March, monthly ADV volumes have consistently been in the $8 to $9.3 billion range.

Looking ahead, with FXCM continuing to relate their intentions to sell the 35% stake of FastMatch that they own, the entire ECN business is viewed as ‘in play’ as an acquisition target. As such, it will be interesting to see the ultimate value that the entire FastMatch, or just FXCM’s stake fetches in the market for a venue that operates in the sub-$10 billion a day range.

Chart says 2014 instead of 2015. Misleading until you realize that year should change in January ;).

Thanks for pointing this out.

I see it as a direct effect of an ongoing turmoil on markets, lack of confidence, market rigging and scandals and destabilizing behavior of central banks… FX market is sick.