With October coming to an end, the monthly volume figures from trading venues and brokers for the month are becoming available. Among FX ECNs, numbers for both HotspotFX and FastMatch are now available for the passing month. Unlike September, when both platforms saw a decline in monthly volumes, the trends diverged during October.

After what seemed like possibly the beginning of a comeback in volumes for Hotspot in August 2015, it’s now clear that it was just a local peak as the figures went down for the past two months leading to one of its worst performing months in the last couple of years. As for the specific number, during the month of October 2015, average daily volumes (ADV) fell 8.5% from September’s $26.2 billion to just $23.9 billion.

On a year over year comparison, Hotspot’s October 2015 result fares much worse. The ADV fell by about 30.3% from October 2014’s corresponding figure. 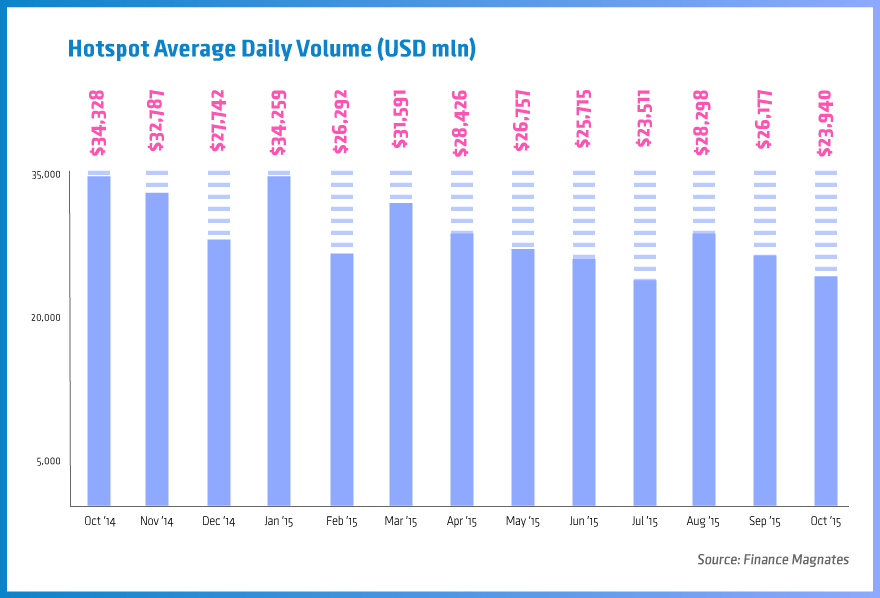 In contrast with Hotspot’s weak performance in October 2015, trading volumes picked up momentum over at FastMatch during the month. FastMatch ADV in October climbed 14.6% to over $8.95 billion, compared with September 2015’s figure of just $7.81 billion.

Possibly helping FastMatch’s performance in October, was the announcement that it has executed the first fully disclosed trade between counterparties over its platform. The trade was executed between an undisclosed global tier one bank and its first liquidity provider that joined – Citadel Securities, one of the largest market makers in the U.S for options, FX and other instruments.