Ever since FXCM made it public that they were selling their 35% stake in FastMatch, an order and quote based FX ECN, it has led to talk that the entire FastMatch may be up for grabs. Even before FXCM experienced losses from January’s Swiss franc volatility, their CEO, Drew Niv, had been talking up the valuation of FastMatch in analysts presentations, as he compared it to rivals.

In recent weeks, chatter has only gotten louder of an impending sale for FastMatch. Adding to speculation has been the closing of the sale of 360T to Deutsche Bourse this week. The recent acquisition by the exchange operator for €725 million followed the sale of Hotspot FX to BATS Global Markets for $365 million in January.

According to industry sources, before closing a deal with Deutsche Bourse, 360T had also received interest from several other exchange operators, including Nasdaq OMX and the ICE. On the surface, the attraction of a 360T or another FX ECN to an exchange is the immediate boosting of currency products for their existing customer base as well as gaining access to a new set of clients.

In addition, beyond just tradable products, exchange operators are also showing interest in electronic marketplace technology that ECNs bring to the table. This trend was seen in the CME Group’s bid for GFI Group, where their attraction in the interdealer was for their energy trading platform.

The dual appeal of technology and FX products is again in play as Finance Magnates has learned from industry sources close to the matter that FastMatch is in the late stages of being sold. Not surprising, five exchange operators; the Nasdaq OMX, LSE, EUREX, LSE and SGX have emerged as potential buyers. The deal is believed to be being brokered by Jefferies, which was also the investment bank that advised 360T in its sale to Deutsche Bourse. As such, within industry circles, FastMatch is being viewed as a compensation prize to losers of bidding on 360T.

Currently, one of the major questions surrounding FastMatch is not whether it will be sold, but at what valuation. Using Hotspot FX as a proxy, and a decline in FastMatch volumes that took place following the January 15th Swiss franc volatility event, Finance Magnates initially estimated FXCM could fetch $20-$40 million for their stake, giving FastMatch a valuation of around $60 to $120 million. That estimate though was predicated only on FXCM offloading their stake, with an entire sale expected to arrive at a greater premium. 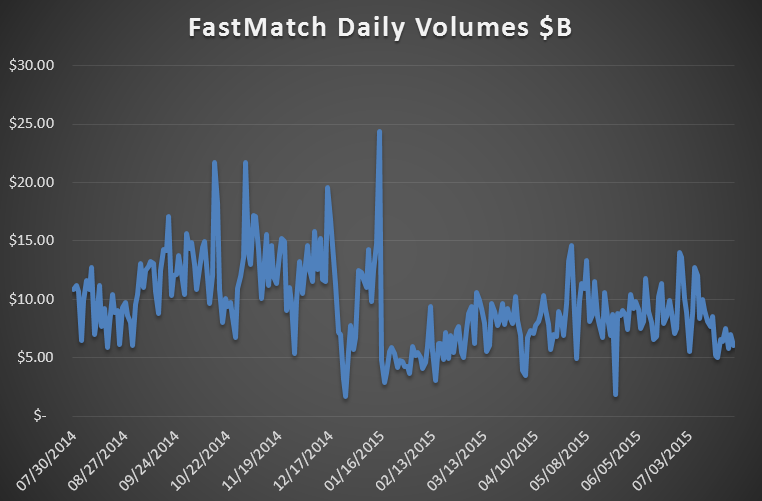 As seen in the chart above, FastMatch volumes have gyrated in the $7 to $12 billion a day level over the past few months. While a rebound from February, activity on the FX ECN remains below its pre-January 15th levels. Nonetheless, belief within in the industry is that a sale of all of FastMatch could fetch close to $200 million. While pricey on a volume-based valuation, FastMatch’s technology has appeal as an electronic platform. Unlike other ECNs, FastMatch is composed of multiple trading environments, using both quote and order-based matching system. The result is that it can be configured to create multiple liquidity pools of different types of buy-side, bank, and non-bank market makers.

In relation to who will emerge as the eventual buyer, the two leading names connected to FastMatch have been the Intercontinental Exchange (ICE) and the Nasdaq. In relation to the Nasdaq, the firm has been boosting their involvement in the FX sector since the end of 2013, and has been attributed to be in the process of creating the infrastructure for centralized platform for currency trading.

As for the ICE, the exchange’s main involvement in the FX industry is its Dollar Index product. While offering a wide ranging variety of currency options and futures, volumes on those products is dwarfed by the Dollar Index franchise. Nonetheless, two factors could be behind their interest in FastMatch; product diversity and technology. First, with their acquisition of the NYSE, the ICE has shown that they are ready to compete among multiple asset classes and trading jurisdictions, as well as believe in the potential synergy of connecting venues. In this regard, FastMatch would increase the ICE’s cash products which are dominated by equities, to also include spot FX. In addition, from its founding in 2000, the ICE has had promoted its technology as being ahead of its older and more established rivals. As such, FastMatch also provides technology appeal, with its matching engine which differentiates its platform from other FX ECNs.

For their part, the ICE declined to comment to Finance Magnates about any discussions with FastMatch.

Of exchanges being connected to FastMatch, the SGX is arguably the most intriguing. The SGX is no stranger to M&A talk, as they had attempted acquiring the Australian Stock Exchange in 2010, and connected as a possible merger candidate with the LSE in 2012. In relation to FX industry, the SGX currently offers regional currency pair futures that are focused on the APAC market.

Where the SGX has gained recent international appeal is through its list of equity index futures. They include futures of leading indexes in India, Malaysia, Hong Kong and Indonesia. Recently, their China A50 futures product has been one of the most active products traded on the exchange. In addition, the SGX is benefitting from Singapore’s overall growth as a major global financial hub connecting the east with the west. Specifically in regards to FX, Singapore has seen an increase of global banks establishing Asian dealing rooms in the country, with the country leading Asia in volumes in the BIS’s 2013 Triennial FX Survey. In this regard, adding FastMatch could be viewed as an opportunity to both boost their FX offering, as well a platform to take advantage of the growing importance of Singapore in the foreign exchange market.

A representative from FastMatch who was contacted for this story was unable to provide a statement about a pending deal or potential acquirers due to the firm’s policy not to comment on market rumors.