Thomson Reuters has just announced the group’s latest foreign exchange trading figures for the month of September 2015, showing volumes growing ever so slightly from the previous month.

The total average daily volume (ADV) of foreign exchange trading across Thomson Reuters platforms (including Matching and FXall) in September totalled $365 billion. This is just one billion dollar over August’s $364 billion figure.

This total reflects trading volumes on Thomson Reuters Matching and FXall in all transaction types, including spot, forwards, swaps, options and non-deliverable forwards (NDFs). The average daily volume for spot trading in September was $109 billion and all other instruments reached a combined volume of $256 billion.

On a year over year comparison the results look more disappointing. In the month of September 2014, Thomson Reuters’ platforms reached a peak of $418 billion, so the latest figure reflects a 12.7% drop.

The group’s monthly metrics can be seen as positive considering that it was able to hold on to the volumes it reached last month and not slide back down as happened to others in September.

Yesterday, EBS BrokerTec announced that during September, its average daily volumes fell from 11% in August to just $89.4 billion. The EBS volumes also marked a more significant drop from the same month in 2014, with activity lower by 24% year over year. 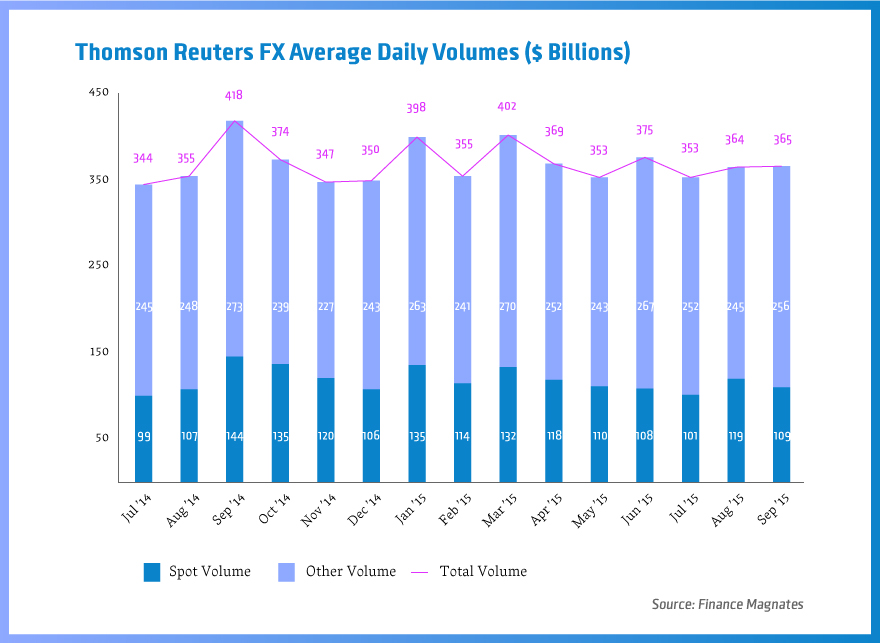