This article was written by Tim Scala, President of TRCI.

We human beings are fairly predictable in the face of adversity.  When something ends sadly, be it the life of a friend or family member, a relationship or even something like a job, we grieve.  The grief can vary from mild to devastating, but nevertheless, we tend to travel through the classic stages defined by Elizabeth Kübler-Ross in her 1969 book On Death and Dying. Kübler-Ross hypothesized that the grieving process encompassed five specific stages, namely:

It would appear that this is precisely what we are watching sovereign nations experience as they come to grips with the loss of their fiscal solvency.  While the process is taking place at different times for each country or group of countries, the actions playing out on the global stage seem to fit neatly into the Kübler-Ross model. 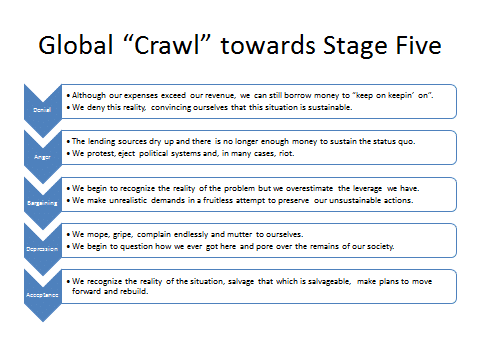 It’s an open question, however, where Japan sits in all of this, after two or three decades of economic stagnation, and quantitative easing.  Looks like Denial to us.

We would argue that, back in 2012, the U.S. was solidly inside the Denial stage since the Presidential election demonstrated that the U.S. electorate simply denied the unsustainability of the national debt at $16 trillion and counting.  Looking back, it is difficult to deny that the winning candidate showed no willingness to reverse our perilous fiscal path.

While some respected voices continue to maintain that there was a plan afoot to balance the revenue/expense dynamic driving our massive deficits, we have concluded that they, too, were simply in denial.

We would point to a number of factors, palpable then, indisputable now, which ensure that our current fiscal path has arguably passed the tipping point and is inevitably headed for disaster.

The U.S. outlook should be particularly troubling for the world at large, since it arguably boasts both the largest free economy and the world’s reserve currency.

– Student loans have impaired the debt position of our younger demographic, resulting in serious, long–term effects. There is now more student debt outstanding than credit card debt. Nearly an entire generation will exit college with enough outstanding debt to put off, voluntarily or involuntarily, buying a home, the traditional driver of economic activity.

– Aging baby boomers are confronted with the opposite conditions their parents faced: rising liabilities (debt) and stagnant or declining asset (real estate) values. Boomers will further exacerbate both fiscal strains and economic growth by putting greater strains on Medicare and Social Security, and adjusting their spending habits to comport with expanding debt service requirements.

– Falling indebtedness will be largely attributable to default rather than repayment.

Grieving is perhaps the most emotionally painful of all human activities.  It’s an excruciating thing to witness but worse still to experience firsthand.  We aren’t particularly happy to present such a downbeat scenario but sadly, our most optimistic projection is that we adjust to the ‘new normal’ which puts a cap on GDP growth for a number of years going forward.

At this late date, even if we were to alter our fiscal path, any adjustment significant enough to correct the situation will be painful, while failing to address it will ultimately lead to even more dire consequences.  Bluntly put, our choices have come down to bad and worse. We can only hope that we move through this process quickly and with a minimum of pain, but recognizing that we will likely be forced to deal with the difficult stages that remain ahead of us.

The Stages of National Grief
wpDiscuz