The two-and-a-half month surge in oil prices began to slow this week, as global growth woes and near-record production from OPEC increased skepticism about the sustainability of the latest rally.

There has been a slight pullback in the oil markets. US crude futures are down around 5% from their 2016 highs, as the market retreated from overbought levels. The technical indicators have also turned lower. Relative strength is below 50 and falling while the MACD shows declining momentum. 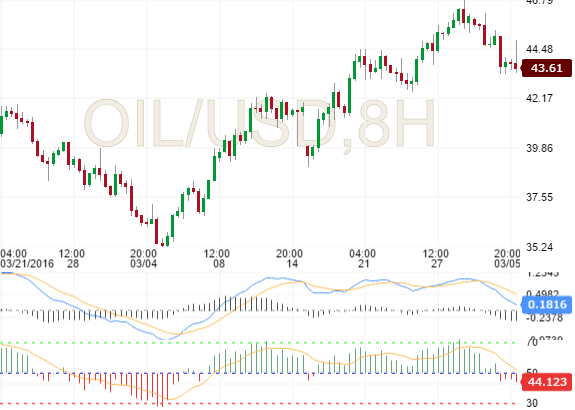 Concerns about an oversupplied market resurfaced this week after a Reuters survey showed that production from the Organization of the Petroleum Exporting Countries (OPEC) reached its highest level in recent memory. The 13-member cartel produced an average of 32.64 million barrels per day in April, just 10,000 short of the all-time high.

Iran continued to ramp up production last month in an effort to reclaim market share. The Gulf nation produced an average of 3.4 million barrels per day, slightly below the 3.5 million-barrel average it pumped in 2011 before sanctions were tightened.

Iraq also raised its output, with exports from its southern ports approaching a new record. In 2015, Baghdad’s output increased by more than any other OPEC nation.

OPEC will hold its next meeting on June 2 in Vienna. It will be the first meeting of major producers since the failed production-freeze talks in Doha, Qatar on April 17.

Meanwhile, market intelligence firm Genscape reported that stockpiles at the Cushing, Oklahoma delivery hub for US crude futures rose by 821,969 barrels in the week to April 29.

Separately, the US Energy Information Administration (EIA) reported Wednesday that commercial stockpiles rose by 2.8 million barrels in the previous week to reach a total 543.4 million. That was well above expectations calling for a 1.7 million-barrel increase. Gasoline inventories also rose by 500,000 barrels, EIA data showed.

The Caixin China manufacturing purchasing managers’ index (PMI), which focuses on small- and mid-sized companies, declined 0.3 point to 49.4 in April.

“All of the index’s categories indicated conditions worsened month-on-month, with output slipping back below the 50-point neutral level,” Dr. He Fan, chief economist at Caixin Insight Group, said in a statement. “The fluctuations indicate the economy lacks a solid foundation for recovery and is still in the process of bottoming out. The government needs to keep a close watch on the risk of a further economic downturn.”

China, which is the world’s largest energy consumer, has experienced a steady downshift in oil demand due to structural shifts in the economy and a weaker export sector. China’s gross domestic product (GDP) expanded just 6.7% annually in the first quarter, a seven-year low.

Analysts have repeatedly warned that the latest rally in oil prices is overdone. The market remains highly volatile and difficult to predict. That’s because there’s far more to the oil market than basic supply and demand. As we saw last month, Saudi Arabia’s production policy has become increasingly entangled with its geopolitical struggle against Iran. This may continue to block short-term efforts to support prices since Iran has no intention to curb outputs anytime soon.

Oil prices received some support in mid-week trading after the Canadian province of Alberta announced plans to evacuate the entire population of Fort McMurray where a wildfire ripped through the country’s oil sands region.