One year has passed since MQL5 became available on the international market. It was a year of hard work, during which the service had become developed into what is now a store of considerable size offering trading robots and technical indicators for the MetaTrader 5 platform.

MQL5 Market’s initial stages began in June 2011 when the service was offered in a preliminary beta mode. From that point, developers were able to register as sellers and offer their products within the service. On February 3, 2012, the service was integrated with the MQL5.community payment system allowing traders to download free products, test demo versions and purchase commercial trading applications. A sales facility was established and the MQL5 service began to gain popularity.

Since inception, over 170 developers of MQL5 Market applications from all over the world have already offered more than 460 trading programs for sale. These programs include trading robots, indicators, various scripts, panels, utilities and analyzers. Expert Advisors form the largest group representing 46% of the total number of published applications. Custom indicators are the second most populated, comprising 33%. Each program contains a description, test results with screenshots and information about the author. The facility to test any application in MetaTrader 5 trading terminal is part of the standard functionality of MQL5.

The prices of commercial products vary tremendously, and are measured by using a credits system, whereby 1 credit is equal to $1.

One particular developer with the nickname “lordlev” lists his TimeMachine Expert Advisor at a cost of 30,000 credits, which has generated considerable discussions on the MQL5 Forum. Despite its rising popularity and increasing number of demo versions being downloaded each day, nobody has actually purchased it yet. It will most certainly be interesting to follow the market success of this particular product.

Most products however are somewhat more affordable, with one third of all the products located in the lowest price range of 10-20 credits per application. Products with the price of 100 credits or higher comprise 27%. The service also has free products (16%). They can be used without any additional charges.

A wide range of products, serviceability and secure purchases available on MQL5 Market attract more and more traders. During the first year of MQL5 Market’s operation, users downloaded more than 23 000 demo versions of commercial products and the same number of free applications to their MetaTrader 5 terminals. In the past six months, the number of downloads via the service is growing by 25% every month. More than 80% of the service’s annual turnover has been registered during the same period.

More than 380 commercial programs have been sold since the launch of MQL5 Market. The first Expert Advisor to be sold was GoodTrade at a price of 90 credits. The Expert Advisor for trading on EURUSD called Freak has turned out to be the most expensive product that was sold via the service. Its price at the time of the purchase was 1279 credits. After the update in January, the cost of this particular Expert Adviser has risen to 1625 credits.

After examining the categories of trading applications sold via MQL5 Market, MetaQuotes concluded that custom indicators are the most popular products in quantitative terms (45% of total products sold) followed by trading robots (37%) and panels (9%). The major part of the service’s turnover is generated by Expert Advisors (77% of total sales) due to their high average price and steady demand for expensive trading robots having the price of 500 credits and higher.

As for the average purchase price in MQL5 Market, this is growing steadily. While in February 2012 the average purchase price was 25 credits, it has risen to 80 credits already in January 2013. The reason according to MetaQuotes is the growing number of high-priced products published in the service and increasing demand for them among traders. Trading robots are the most expensive applications when compared by categories. Their average price has already reached 160 credits per Expert Advisor. The robots are followed by panels with the average price of 50 credits per products.

Technical indicators come third in TOP 3 of the most popular applications. Their average purchase price has never exceeded 30 credits. This is quite unusual, as high-quality indicators for automatic or semi-automatic trading are always in demand. 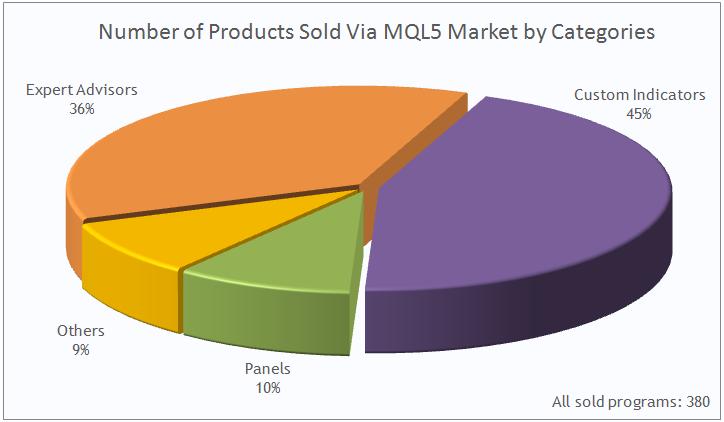 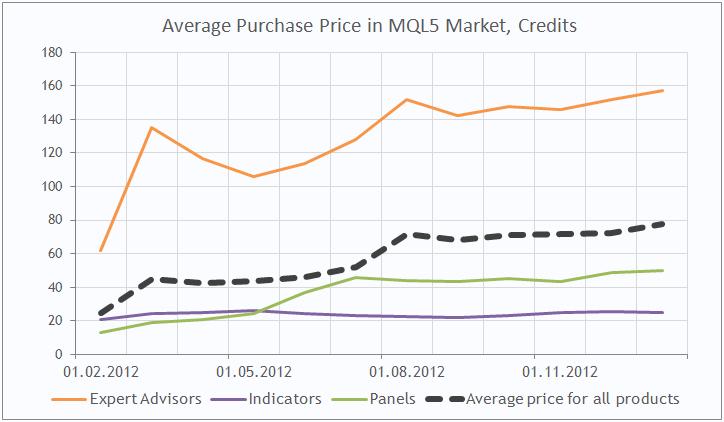 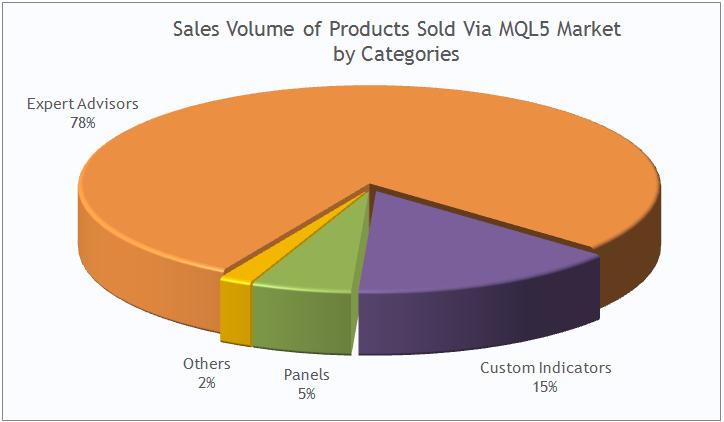 Is there any plans to implement a leasing version of licensing (recurring payments). Either on a weekly or monthly basis?

I understand that metaquotes currently only supports a 1 time fee structure. Is there a minimum or maximum amount of time in which the developer is required to support the product?

Hi Jon, I think this is not necessary
So, this sales model supports MetaTrader 5 Trading Signals service.

Yes, recurring payments are implemented in Signals service and we can work with them. Market service supports only one-time payments. However, thank you for the suggestion. If developers and traders require this payment method, we will certainly implement it.

@emily. Why do you say that recurring payments are not necessary for market products?

@metaquotes. Can you comment on how long a certain version of ex5 is supposed to run successfully or ‘warranty’ from future mt5 builds? A change in mt5 could cause a major re-write to the source code to keep the EA/indicator/etc functioning.

@Jon, This is not so much money to bother to recurring payments.
Аnd I think even the developers (sellers) on it just will not go. Tracking payments, control transfers, increase arbitration disputes, technical support and so on – it’s high additional cost for developers, isn’t it.

MetaQuotes Software does its best to preserve compatibility of EX5 with future builds. That is why there is no reason for ex5 application to lose its functionality after new builds are released.