Finance Magnates spoke with Richard Gardner, CEO of Modulus, regarding the firm’s unique trading solutions and out of this world applications, including its selection by NASA. His in depth interview can be read in full below.

1) How did you get involved with developing for the financial markets?

In the early 80’s, at the age of thirteen, I gained an interest in trading commodities after reading an advertisement in the back of a Popular Science magazine. The ad was for a direct mail home study course that taught how to trade commodities. I took the course and shortly thereafter started trading futures under a custodial account that my parents set up for me.

Of course I made a few beginner mistakes that thankfully were not too serious, but my trading eventually became quite profitable, perhaps by luck. Growing up, I lost a few girlfriends because my room was entirely wallpapered with Knight Ridder commodity trading charts. I was obsessed with trading throughout my teenage years. My trades were made at the discretion of my father, and I traded futures for about a year and a half before I made enough money to cause attention and my parents decided it was time for me to stop trading.

But, I had a taste for trading, and years later, I started trading full time. Although software such as MetaStock 1.0 was available, I chose to go to technical school and learn programming so that I could write my own software.  A decade later, in 1996, I developed a commodity trading system that used A.I. to analyze crop reports and weather data for trading grain futures. I used my profits to start and fund an A.I. company at the height of the dot com era, which I sold to a Fortune 500 company, starting my current company, Modulus, in 1997, which now has several million lines of code that has been developed over the years.

2) Rather than selling turnkey trading solutions, Modulus focuses on licensing modules to developers to create their own products. What are the most popular module requests from bank and broker customers?

Modulus has grown over the past eighteen years to provide a wide array of products and services, from front-end desktop apps, web and mobile trading platforms to back office products, exchange engines which power some of the world’s largest exchanges, and even custom hardware solutions for hedge funds that use IBM sYNAPSE neural network chips for high frequency trading, just for example. We’ve worked with lots of different technologies. The most popular offering has been our M4 trading platform, which is a professional trading application that comes with commercially supported source code. The application can be customized to any extent. 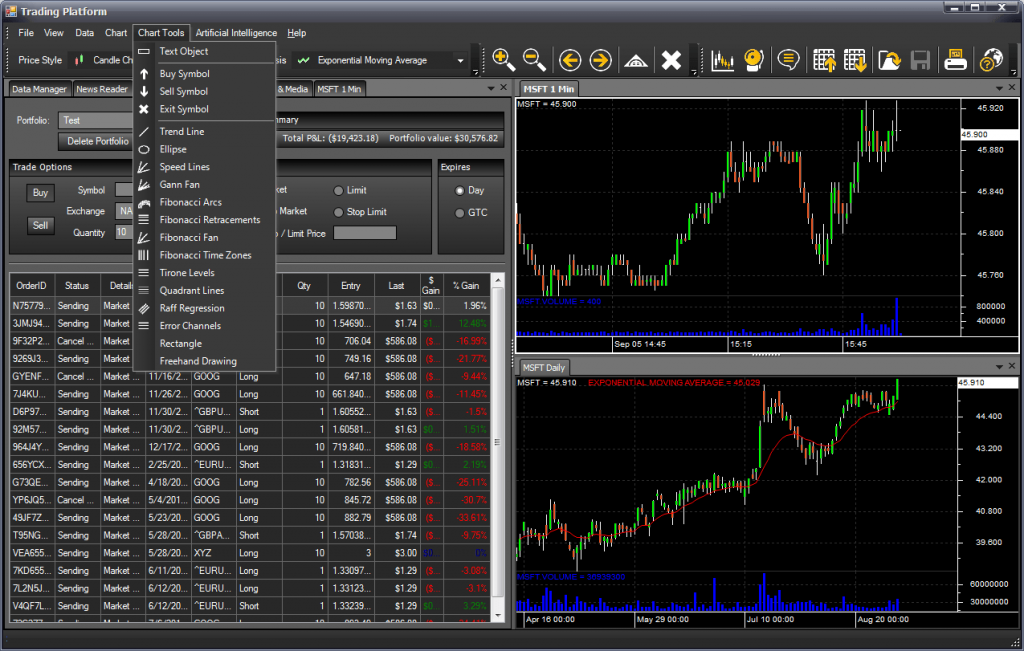 3) Among your services are also products to individual traders such as tools for algorithmic trading. What are the main services you provide to such traders?

Professional traders know us for our customizable codebase and our A.I. components, as well as for our expertise in connecting with just about every brokerage API, data vendor API, exchange, and liquidity provider out there, using FIX or any number of other protocols. We are also known for our expertise in high-performance computing and custom hardware development.

4) How has mobile trading changed the development process for new trading products?

Mobile application development has been a rapidly evolving landscape, and it has been especially painful for retail brokerages over the past several years. There are a number of different technologies used for mobile application development including HTML5, PhoneGap, Xamarin, and native languages such as Objective C for iOS and Java for Android. With all these different technologies, it has been difficult for brokerages to make a choice.

We always recommend using a native language for the best possible performance, such as Objective C for iPhone and iPad or Java for Android devices

We always recommend using a native language for the best possible performance, such as Objective C for iPhone and iPad or Java for Android devices even though this entails supporting multiple codebases. HTML5 has been a quick and easy fix for many, and it’s an acceptable technology for web applications, although it is not a preferred solution for mobile applications in our opinion, and we would never think of using HTML5 for desktop applications. There’s the problem.

By our standards, there has not been an acceptable solution to natively support the desktop, web and mobile environments with just one codebase. Xamarin looks promising but it still has a long way to go. Supporting multiple codebases can be expensive and keeping the UI and user experience consistent across multiple platforms is challenging. Professional traders and day traders require very fast, low-latency software written in languages such as C++, .NET or Java (just for example) specifically for the desktop.

5) How do you believe developers should prioritize their platforms, web/desktop first and then focus on creating mobile apps that are customized for the smaller screen? Or should they be mobile first with a focus on providing a similar look and feel across all devices?

It depends on the sophistication of the app and the requirements of the end user (the trader). For example, if the developer is building a simple binary options trading platform that is as simple as a buy and a sell button, then just build a mobile app first and a desktop app second (if at all). For retail trading apps, developers should build a native desktop app first and a mobile app second.

If the developer is building a simple binary options trading platform, then just build a mobile app first and a desktop app second

Some of the functionality of the desktop app might not make it to the mobile app. For example, if a full-featured desktop app has features for building trading systems and for back-testing, those systems could be uploaded by the desktop app and loaded on a server, while a mobile app could monitor the status of the systems and control their operation to some extent.

Professional traders require a desktop platform written in a native language, written at least partially in a low level language such as C++ for Windows or Linux or Objective C for Mac. If the developer can go as far as using inline Assembly language or GPGPU for parallel processing, that’s even better. A professional desktop platform these days should take advantage of multicore processing, which is surprisingly lacking in many desktop platforms. TradeStation only very recently added multi-core processing to version 9.5, which runs over three times faster than their previous non-multi-core version for back testing. TradersStudio and many other platforms are also now starting to offer multi-core processing.

6) In the past, Modulus Global has warned that a risk with HTML5 platforms is that its code can be copied by competitors quite easily.  As such, what is the optimal path to develop web-based platforms with the flexibility of HTML5, but that protect IP?

It almost goes without saying that the best approach is to keep the client app very thin with all the proprietary logic running on secure servers. For example, if you have a proprietary technical indicator, you do not want to run that indicator on the client-side, even if the client-side JavaScript code is obfuscated. Security is of the utmost importance in any financial app. Always use SSL, never store passwords in a database (use a salt and hash instead), never trust user input (check for SQL injections), prevent buffer overruns and timing attacks, prevent cross-site scripting and so forth.

7) Modulus recently was chosen by NASA to provide charting technology for the International Space Station.  Similarly we are seeing other fintech firms with experience handling high volumes of data begin to target other industries like telecom and media.  Where do you believe the opportunities for Modulus and other fintech firms are to leverage their data expertise into other fields?

Fintech deals with enormous volumes of data, complex analysis and forecasting, and high performance computing. These attributes apply to all sorts of other fields such as healthcare, scientific applications, even counter-intelligence (see Palantir). At Modulus, we are expanding into several new industries. Currently, we are working with healthcare and counter-intelligence. We’re leveraging our high performance computing and cognitive computing expertise to develop a solution similar to IBM Watson, specifically to help paramedics and emergency physicians make critical medical decisions.

In the past we leveraged our cognitive computing code to help diagnose and manage breast cancer. Soon, we will be developing a custom hardware solution that will run up against the sheer limitations of physics to make decisions in under 80 nanoseconds for counter-terrorism. All of these technologies borrow from experience gained in fintech.

Very sharp man. He found a gap, and filled it. The third phase of industrial revolution,
is here.

– So if you had to go cross-platform AND proprietary, is Java the best? – And in your regards to mobile app vs desktop app, do you think that accessing a VPS or desktop app via RDP or remote desktop interactive apps like Splashtop that allows the user to interact with the full desktop app on their mobile would be more efficient than trying to mimic all the functionality with a separate mobile app? – why do you think so many desktop trading apps still are not multi-core capable? How difficult is it to ‘convert’ a language to propel it… Read more »

– So if you had to go cross-platform AND proprietary, is Java the best? A: Java isn’t a bad choice, however sometimes users complain about the UI being sluggish with Java. There are ways to avoid that if you search StackOverflow. Also with Java you can use tools like codenameone.com to target iOS and Android. – And in your regards to mobile app vs desktop app, do you think that accessing a VPS or desktop app via RDP or remote desktop interactive apps like Splashtop that allows the user to interact with the full desktop app on their mobile would… Read more »