Following yesterday’s reports that investigators from the Israeli Security Authority (ISA) have raided the offices of FX and CFDs brokerage iTrader, Finance Magnates have obtained court documents shedding more light on the case. Seven executives iTrader Israel have been arrested for investigation and they are now released on bail under limitations from leaving the country.

The official suspicions are that iTrader Israel offered unlicensed portfolio management services between May 2013 and May 2016, and fraud under serious conditions. They allegedly pressured clients to increase their investments without caring about the disastrous effects on their lives. The owner is also accused of tampering with court proceedings. The investigation is not finished yet which is why the prosecutors asked for the seven to get bail under limitations – their passports have been taken away from them for 180 days. 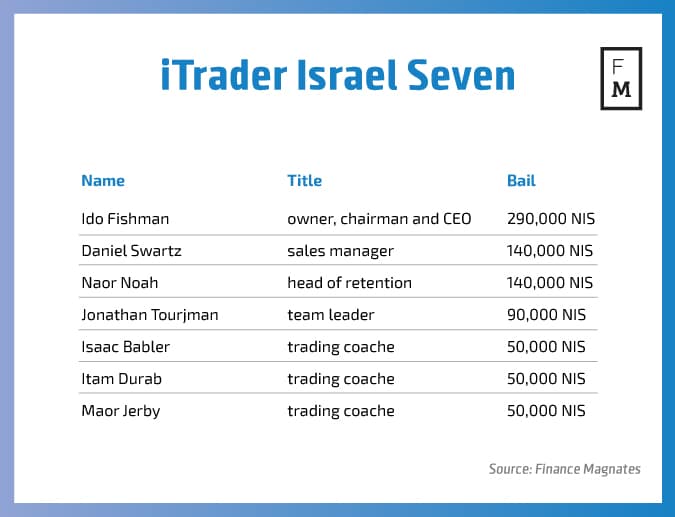 The prosecutors accused the iTrader Israel team of “running a well oiled scam machine and exploiting clients that did not understand investing and blindly followed the false show they were presented by employees of the firm, supposed trading coaches, which know how to tell falsehoods to activate them to give their money. They acted out of greed and bonuses at the expanse of the clients, hid relevant details from their accounts, even when losses accumulated for the clients. These employees knowingly exploited under the supervision of the managers, all to continue the oil machine of pouring money into the firm for failing investments, when they know the chances are very big the clients will lose their funds.”

It should be noted that iTrader Israel was a very well known player in the local trading scene before the regulators refused to grant it a license. The brokerage sponsored major national sports teams such as the soccer club Bietar Jerusalem and the Maccabi Tel Aviv basketball club.

Share this article
Tags: israel / itrader
Got a news tip? Let Us Know