Only eight new companies have received a license to operate from the Cyprus Securities and Exchange Commission (CySEC) in the second quarter of 2014. A possible reaction to a tightening regulatory regime.

The Cypriot financial watchdog favored by FX and Binary Options brokers , CySEC has come under pressure from European regulators to increase the level of scrutiny of firms under its domain for some time now. Only last month, CySEC announced new requirements for capital adequacy and exposures reporting affecting Cyprus Investment Firms (CIFs) submission processes. As the comfortable regulations in the past were one of the main reasons for brokers to seek a license in Cyprus, harsher requirements and oversight might drive them away.

One example of the new regulations is that CIFs providing investment services and holding clients’ money must now prove they have an initial capital of at least €200,000. Such a requirement might have been the reason for the fewer number of firms applying for a CIF license. In the first quarter of 2014, a dozen CIF licenses were approved and in the second quarter of 2013, eleven firms were licensed. This means Q2 2014 saw a drop of 33.3% Quarter over Quarter and 27.3% decrease Year over Year.

This development might be a worrying sign for the FX and Binary Options trading market when a lower number of new competitors want to enter the field, possibly signaling that the rush for profits is over. But, it might also be an encouraging sign that the market is maturing and beginning to stabilize. The performance in the following quarters and years will prove what direction the market is taking.

The Number of New Investment Firms Licensed by CySEC: 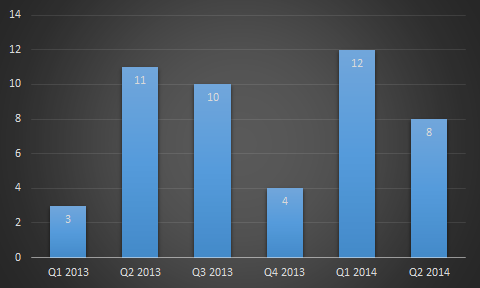