Is it possible that one decision could have changed the image of the whole retail Forex and CFD industry? An example of how trading volumes fell in 2019 clearly shows this is not just an imaginary threat. The past year was clearly dominated by regulation and declining turnovers under the banner of the “Great Migration” of traders. The Finance Magnates Intelligence Department analyzed it in the latest edition of the Intelligence Report.

As a result of regulatory changes in Europe, retail clients have started to look for new opportunities in offshore jurisdictions like Vanuatu, Estonia, and the Bahamas, which have become the Holy Grail for investment firms. Market professionals in interviews with Finance Magnates confirmed that the change in the direction of the regulatory winds has visibly modified the strategy of the brokerage houses themselves. Companies regulated by ASIC, CySEC, and the FCA began to look towards more exotic locations to offer their clients less restrictive trading conditions, including access to higher leverage.

However, according to Daniel Byrne, Managing Director at easyMarkets APAC, ASIC is moving in the same direction as ESMA and “will imminently implement Product Intervention reforms along similar lines, centred around lowering the access to leverage for retail traders in Australia.”

“While there is some conjecture as to what the precise changes will end up being, in our view, it will likely be significantly lower than it is today.  We are open-minded to the changes and can see both upsides and downsides that will come with them (…)  However, the regulators could ironically be placing some traders into even riskier territory by potentially driving them to less regulated jurisdictions in order to obtain their desired buying power, which they can no longer access in Australia. One thing is for sure, and that is that 2020 will be a year of enormous change for Australian Licensed FX and CFD providers,” Byrne stated.

From the beginning of 2018, when world trading volumes reached a multi-month high (excluding Japanese brokers), activity began to decline gradually. As a result, the total volume stood at 5.508 billion dollars in Q1 2018 to drop to just 4.593 billion dollars in Q2 2019 (a decline of 17%). 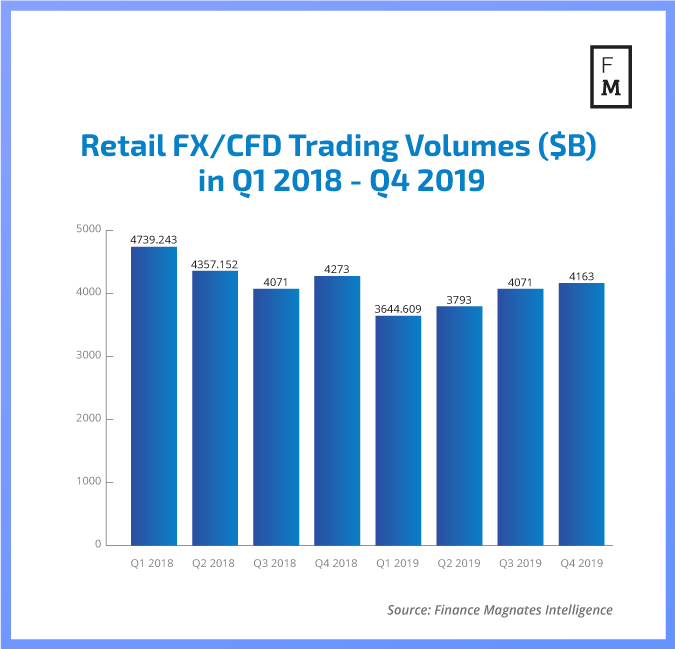 The fact that the retail market should prepare for change was also noticed when IG Group had to give up its leading position among the 40 biggest FX/CFD retail brokers to Australian-based IC Markets. In the first quarter of last year, the total volume of the Australian broker amounted to 563 billion dollars, compared to 474 billion reported by IG Group in the same period.

Another example, Pepperstone, perfectly illustrates how the market power of Australian brokers has increased. The local giant fears that ASIC’s powers will stifle innovation in Australia.

To get the full article and the bigger-picture perspective on how industry evolved in 2019, get our latest Quarterly Intelligence Report.