The provision of mobile applications by OTC forex and binary options companies has become instrumental to their offering and in many cases has resulted in a significant increase in trader activity. As such a majority of firms consider it an important interface between broker and client.

Such mobile platforms are now approaching ubiquity and are subject to regular updates in order that brokers can keep ahead of the competition and keep their clients engaged.

Arriving on the market this week, British spread-betting firm ETX Capital could be considered a latecomer with the introduction of its iPad application which became available some time after many had entered this segment and established market demand now exists.

The new iPad application follows a string of recent technological developments including the successful release of Trade-through Charts in early Q1 2012 which won the MoneyAM award for Best Online Charts, multiple watch lists in Q2 2012 and the enhanced platform in Q4 2012.

As part of ETX Capital’s policy of innovation and enhancement, the company focuses on providing the tools available to its customers which best suit their requirements, offering its own in-house trading platform alongside the MT4. The new iPad application is a therefore a standalone platform for the iPad which was developed in-house and available for download via Apple’s Appstore.

The intuitive iPad app gives clients the flexibility to take advantage of every market move with a simple to use multi-pane layout, drag and drop functionality and dynamic Trade-through Charts. Clients can effortlessly open and close trades with one tap trading, monitor positions, access thousands of live prices and set limits and OCOs.

Andrew Edwards, CEO said of this new launch “we firmly believe in innovating for the benefit of our clients which is why our iPad application has been carefully developed and tested to give our clients the best possible trading experience. The iPad application complements our existing desktop platform and iPhone app with an Android trading app release planned for later this year.”

To support the launch of the iPad trading app, ETX Capital will be hosting competitions on their Company Facebook page in April allowing followers the opportunity to enter and win prizes including an iPad. 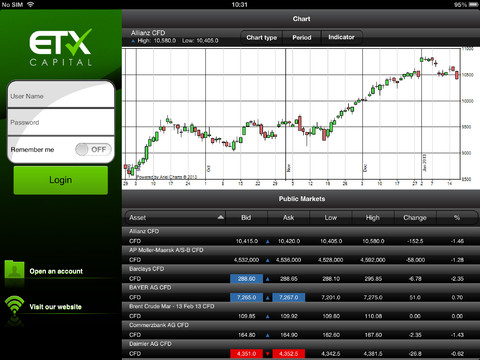