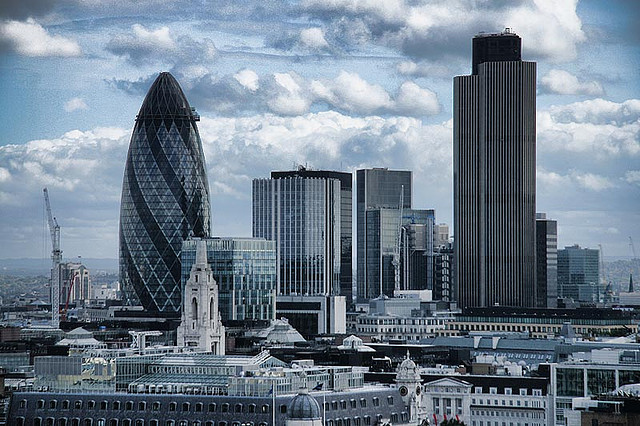 The world’s most liquid financial asset class, coupled with the world’s largest centre for currency trading, continues to show an upbeat performance despite geo-political situations posing threats. London’s position as a pro-industry destination for FX derivatives continues, as market participants value the location, time zone and talent pool, as they grow their global business.

London became a magnet for leveraged currency trading in the aftermath of the 2008 recession which saw the making of game-changing rules in the US under the Dodd-Frank Act. As a result, major players such as GAIN Capital and FXCM extended their businesses across the Atlantic through domestic entities, adding more flow to London’s existing 40% market share of foreign exchange trading volume.

The same trend continued with brokers from other established financial centres, such as Sydney, Tokyo, Jakarta or Dubai finding their feet in the UK market.

Piyush Parekh of VIBHS, FX broker, explains to Forex Magnates why he chose London to expand his business: “London has always been on the agenda for VIBHS, we are a dominant player in the Asian markets and having a UK-based operation gives us a global attire, we can already see the benefits with new leads and enquiries coming through.”

A similar approach by one of Australia’s established providers, AxiTrader, the firm launched its UK office in 2014 and  Alex Mackinnon, the firm’s CEO, explained that the London operation is part of the company’s international strategy.

London has been a centre of excellence for FX and CFD trading with the margin derivatives market conceived on the trading floors of the city, over 30 years ago. The capital has pioneered the regulatory framework of the product that is an established investment product in several regions, including Canada, Australia, Singapore, South Africa and Germany.

Furthermore, ongoing developments by the financial watchdog, such as the revised client money rules that came into effect in June 2014-June 2015, allow the country to safeguard its dominance in the sector. Governance and talent are key components of the London market, as Mushegh Tovmasyan, CEO of Divisa Capital, a liquidity and technology solutions provider, explained to Forex Magnates during an interview: “Having worked across three continents, the level of knowledge and expertise in London is a compelling reason why we’re doing business here.”

UK-based education organization,the Chartered Institute of Securities and Investments, provides training and education for professionals in the sector. Its courses are recognised by the UK’s financial watchdog and staff at FCA authorized firms use the certificates to ensure they have the right information to carry out their roles.

The organization has become an international benchmark for standards for financial services professional. Anuj Ojha, a Pune-based professional says: “The CISI courses are well recognised across the banking and finance industry and give us an opportunity to appreciate the sophisticated knowledge-base that London has to offer.”

London sits comfortably across the Asian and North American time zones with an 8 hour difference from the Far East and five hours from New York, thus allowing executives stay connected to participants across the globe.

Mr. Parekh adds: “It’s definitely convenient for me, when I compare it to Dubai, we can communicate with Hong Kong/ Mumbai on the early shift and finish up with the guys in New York and Chicago, and still make it home for dinner!”

Most Liquid Centre for FX Trading

The UK is the most liquid destination for currency trading, reports showing that it holds a 40% market share in daily transactions. The capital city is expected to increase its market share of global trading volumes, with estimates of 43-45% of transactions executed in the city, to be reflected in the 2016 Triennial Survey.

Data from the most recent BoE Semi-Annual Survey October 2014, shows a sharp rise in overall trading volumes in the UK, the average daily reported foreign exchange turnover was $2.6 billion in October 2014, an 11% increase from figures reported six months earlier in April 2014, and 19% higher on a year-on-year basis. The BoE’s report stated: “This is the highest level of turnover recorded since survey inception. Turnover in most products rose to new survey highs.”

The troublesome EUR/USD contract continued to dominate the spectrum among forex traders, volumes increased 18% in the most popular financial derivatives contract with the BoE reporting a new survey high of $805 billion per day. In addition, the USD/JPY contract’s turnover rose 23% from April 2014 to $430 billion per day, remaining below April 2013 highs. 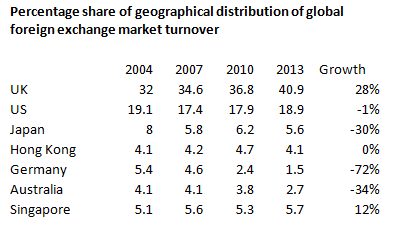 Keith McCulloch, a London-based financial technology professional adds: “Markets were bound to recover after the year-long volatility drought which was a stagnating concern for brokers, the euro’s decline and Draghi’s QE have both bolstered activity in the second half of 2014.”

In the midst of attracting pro-business companies, London has also fallen victim of eliciting firms misusing the City’s stature as the globe’s godfather in forex and CFD regulations. A number of firms have cloned websites of UK-based entities, replicating the logo, brand and regulatory number, however the non-regulated provider operates outside of the regulatory domain and is usually an overseas firm. The FCA has been actively revising and warning against such firms by notifying users on this website.

On a macro level, the UK was hit by the fixing and Libor scandals which had a detrimental affect on London as a well-governed location for financial series. However, the regulators have been working with relevant bodies to supervise sectors such as the daily fix in gold and the Libor administration, thus bringing stability to the London market.

Adding to its position as the destination for finance, the UK is gaining traction among technology specialists as it attracts funding and expertise in the business sector. The UK government issued a note which outlined developments in the sector, according to data compiled by London & Partners, London-based tech firms attracted $795.2 million from US investors in 2014, more than doubling the previous record figure from 2012 of $296 million. Investment from the US into the UK as a whole also set a new record of $1.35 billion, compared to the previous record of $582 million received in 2012.

The fintech sector is also seeing a new grain of light, the recent dilemmas affecting forex rates and the difficulties individuals and businesses face when applying for loans has brought to light new tech-driven firms that are trying to alter the marketplace. Peer to peer lending, crowd funding and intermediary deliverable FX providers, are a by-product of the post-recession fiasco and are becoming viable alternative options.

Baroness Joanna Shields, Digital Economy Adviser to the Prime Minister and Chair of Tech City UK, commented in a statement: “There’s nowhere better in the world than the UK for technology companies to expand internationally. Companies like Box have already benefitted from our substantial capital, cutting-edge infrastructure and world-class workforce. Our digital economy has all the right conditions to help fast-growing technology companies thrive on a global scale. For those that are ready to expand their footprint, now is the time to make the move.”

Hi Ken, I don’ t believe that the FCA accepts ‘gifts’ from bucket shops. An institution like that doesn’t need the petty cash!

If you can pay the fees and write your own name the FCA will regulate you. I said nothing about gifts.

There is no doubt that London affords these firms credibility and strength far beyond their balance sheet and relative size. With London comes FCA authorisation and regulation and critically, FSCS protection which is extremely important to me as a retail trader. In the UK, I know that come what may my money will be protected in full as long as I deposit less than £50k- the FSCS have a history of paying claims and paying them quickly. I don’t know of any other compensation scheme globally that provides this reassurance for this type of trading. Whether the FCA should scrutinise… Read more »