The 2017 Finance Magnates London Summit is just a few months away, with more and more executives, companies and thought leaders primed to attend. The event stands to be the largest summit to date, having reached 600 confirmed attendees today, 30 percent higher relative to this point last year.

Hosted in the heart of London by Finance Magnates, the event will bring together the most influential people in the trading industry to network, learn, and discuss leading issues. The London Summit is filled with distinguished speakers, diverse panel discussions, and hands-on workshops. It takes place on November 14-15, 2017 at Old Billingsgate.

Tweet about the summit with its hashtag, #londonsummit17, and we’ll feature it in our posts!

Despite being a couple of months away, interest in the event is already buzzing, correlating to higher numbers of attendees. The London Summit will featuring the biggest IBs as well as top-tier retail brokers, asset managers, technology leaders, banks, hedge funds and regtech start-ups.

This year’s London Summit will touch on several key issues currently facing the industry. The collective impact of US and European elections in tandem with ongoing Brexit negotiations have yielded a material impact on markets. Additionally, the financial services industry is poised for a major shakeup this January with the implementation of MiFID II.

A brand new aspect of the event is, inevitably, the subject of cryptocurrency and ICOs. Dubbed by Vitalik Buterin a bubble, and flagged by various regulators, the popularity of ICOs shows no signs of slowing down. The event will cover this booming funding method. The event will also emphasize cryptocurrencies, which have taken center stage at brokerages as demand for these instruments spikes to all-time highs.

Too late for an early bird?

Almost! Prospective attendees are invited to consult the reduced prices timeline below. Don’t miss your opportunity as capacity is limited and registrations are flying by at a record pace. If you haven’t registered already, what are you waiting for? 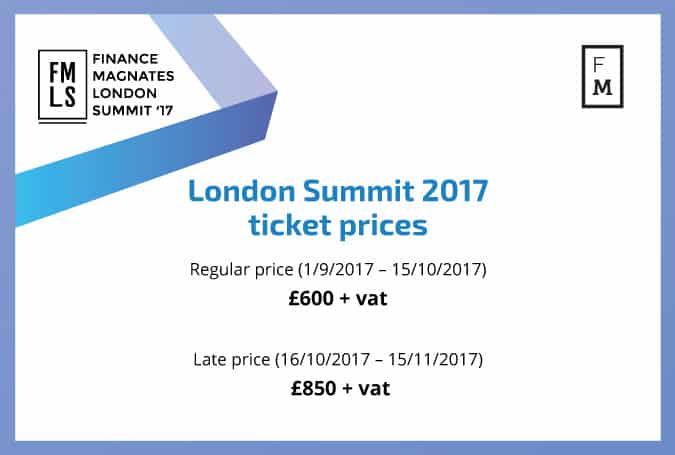