After it struck a new deal with the currency trading firm, in order to give the business more time to exit some holdings, Leucadia now owns a 49.9% membership interest in FXCM Group, while the New York-based foreign-exchange broker will retain the remaining 50.1% stake in the group.

The new agreement provides that FXCM Group would be governed by an eight-member board, including three members appointed by Leucadia, three directors appointed by FXCM, two independent directors and one each to be nominated by the two firms.

At the expense of FXCM shareholders?

To clarify how the new amendments affect the shareholders in simple points, in case FXCM is sold, the loan to Leucadia will be primarily repaid in full. After that FXCM shareholders will then get 45% of any revenues from the sale up to $350 million, compared with 50% in the old waterfall. For the next $500 million, they will receive a share of 8.8% from any distributions or sales proceeds. This reflects another 1.2 percent loss from the previous suggested distributions plan. Any amounts beyond that, they are entitled to receive 34.4% compared with a previous share of 40%. 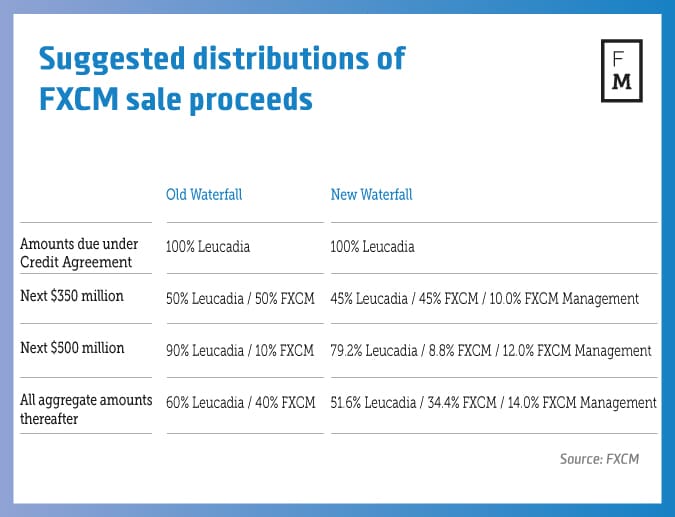 After January 2018, each firm would have the right to unwind the partnership, possibly resulting in a sale of FXCM Group. Additional terms include extending the maturity date of the credit agreement by one year to January 16, 2018, potentially giving FXCM more time to raise funds to repay its debt by shedding noncore assets.

While FXCM was actively marketing the non-core assets it has identified to be sold, Leucadia and FXCM concluded that greater value could be realized for all stakeholders through additional time to complete the asset sales.

In addition, Leucadia will get a portion of the proceeds if FXCM or some of its assets are sold. It can also force the sale of FXCM starting in 2018.

Earlier in the week, shares of FXCM enjoyed a strong run off their two week lows. Some of that move took place on expectations that the agreement with Leucadia would be restructured in a way that would be friendlier to the company’s shareholders. However, the change announced today focused on strengthening FXCM management’s claim to potential future profits.

FXCM would retain the right to defer any three of the remaining interest payments by paying interest in kind. This would help FXCM honor its debt obligations, whilst reiterating maximum flexibility to invest and grow its core business moving forward. However, until the loan and interest under the credit agreement are repaid in full, all distributions and sales proceeds shall continue to be used solely to repay the loan plus interest.

Simultaneously, a long-term incentive program with a five-year vesting period would be put in place for FXCM senior management. This will help maximize cash flow generation and the growth of the business that would operate only after Leucadia’s principal and interest under the credit agreement is repaid and would equal the following:

Rich Handler, Chief Executive Officer, and Brian Friedman, President of Leucadia, stated: “We are pleased to affirm our long-term commitment and investment in FXCM and are excited about our prospects for success.  We look forward to our role as board members of FXCM Group, LLC, and we believe that, together, Leucadia and FXCM can further strengthen and expand the FXCM platform.”

Drew Niv, Chief Executive Officer of FXCM, stated: “We are delighted that Leucadia has shown its commitment to FXCM by becoming a long-term partner.  This partnership can bring many benefits to FXCM shareholders, clients, and employees.  Leucadia’s financial strength and its skill and expertise — including the deep expertise available at Jefferies — make it the ideal partner to help FXCM to continue to grow our business.”

For shareholders, two Things are important:

1. The core Business must be strong
2. The non-core assets must get sold at the highest possible price

Both things are in fact valid, the core business is strong, and though additional time they get a higher price for their non-core assets. If they sell just one of the remaining assets, the debt and the interest rates they pay for the debt will fall dramatically.