One of the largest Japanese brokerages, GMO CLICK Securities, today published its September 2014 retail FX volume figures from trading on the FXNeo platform. 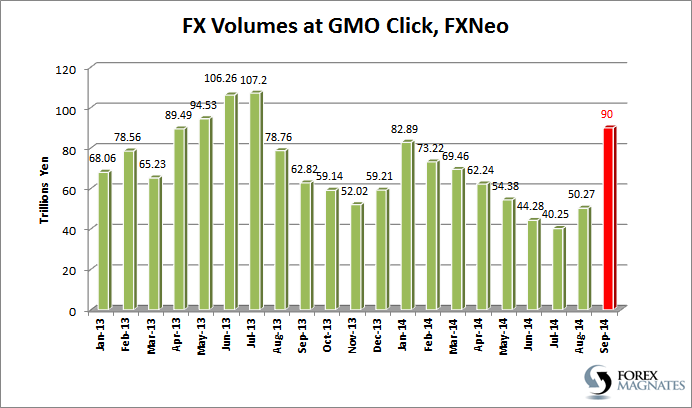 Today’s results from GMO mirror several other positive performance reports specifically for the month of September. The FX market has burst into activity across the board among all retail brokers. The reasons have been multifaceted but directly linked to macro-economic and geopolitical developments including central bank manoeuvring (and expectations of), monetary policy diversion and the Scottish referendum. Forex Magnates has recently published volume metrics for MOEX, DMM, Saxo Bank, CME and KCG Hotspot all of which show particularly strong performances over the past month and broadly stronger metrics for the third quarter.

As reported by Forex Magnates yesterday, GMO opened an office in London and joins an increasingly long list of Asia-Pacific originating brokers to obtain an FCA license and operate from the UK.