Japanese broking giant GMO Click has released its latest tranche of trading volumes for the month ending in June 2016, which rebounded strongly during the month, achieving levels not seen since February of this year, according to a GMO Click Statement.

GMO Click’s over-the-counter (OTC) FX trading volumes came in at $1.08 trillion (¥110.2 trillion) during June 2016, constituting a rise of 20.1% MoM from just $901.0 billion (¥91.7 trillion). This was the highest figure seen since February 2015, which effectively snapped a three-month consecutive monthly decline. One facet also helping fuel the rise in overall volumes was the differential in trading days – June 2016 numbered 22 trading days vs. just 19 in May 2016.

Currency trading volumes were higher across the board in virtually every jurisdiction given last month’s Brexit vote and the scramble to park money in safe haven currencies in the aftermath.

Looking at the other figures, GMO Click saw a daily OTC FX trading average of $49.2 billion (¥5.0 trillion), reflective of a MoM jump of 20.1% from $41.0 billion (¥4.17 trillion) set back in May 2016. The narrative is likely similar, with average daily volumes (ADV) returning to its February highs after incurring several months of declining figures. 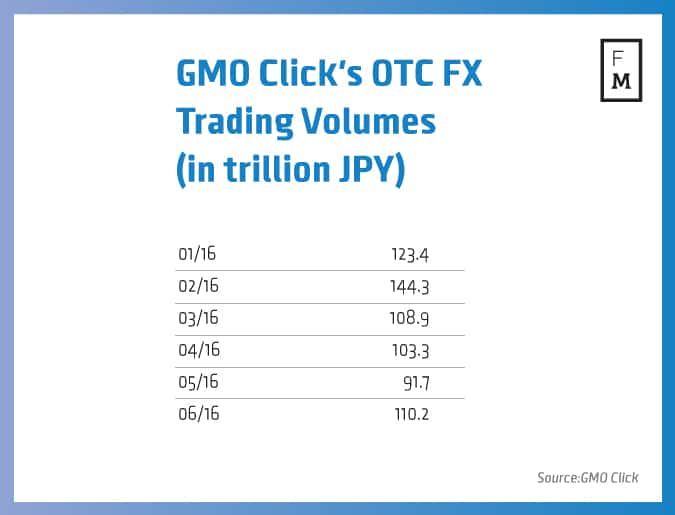