According to the latest retail foreign exchange dealers (RFEDs) data released today by the US Commodity Futures Trading Commission (CFTC), retail FX funds held at registered brokerages operating in the United States have decreased by 1.59% MoM in April 2015 compared with the month of March.

The monthly drop in April has brought the overall market size to lower than it has been before March’s marginal increase of 0.73% MoM. Moreover, most of the relevant brokers have suffered drops in the amounts of FX funds they held in April.

The notable exception was GAIN Capital (NYSE: GCAP) which FX funds rose by 1.13% while its major competitors in the American market suffered. Smaller America FX player RJ O’Brien and Associates experienced a bigger jump in held FX funds, as measured by relative percentages, with over 15% rise.

In addition to FXCM, Interactive Brokers and MB Trading also had a relatively weak April which translated into a smaller market share. Meanwhile the market share of RJ O’Brien remained almost marginal at 0.2%. 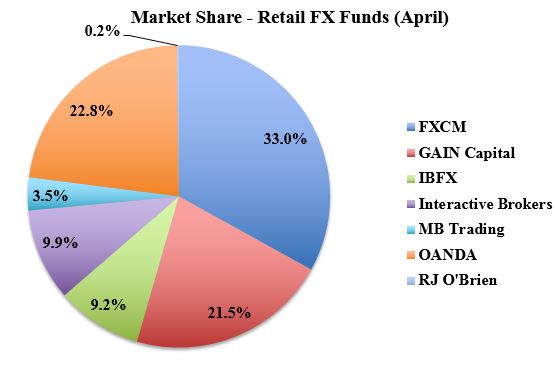