Foreign exchange and CFDs (contracts for difference) brokerage GAIN Capital has today reported its operating metrics for the month of January. The company is updating its investors on both retail and institutional trading every calendar month.

Total volumes at GAIN Capital increased at a more moderate pace of 13.3 per cent to $318.7 billion. The figure is flat when compared to January 2015, when we saw record volumes across the industry due to the Swiss National Bank (SNB) induced volatility.

The number of active accounts totaled about 143,766, which is lower by 2.2 per cent from December 2015. The figure is higher by a whopping 49.5 per cent when compared to January 2015, however this is due to the fact that the company completed the acquisition of U.K. based City Index later during the year. 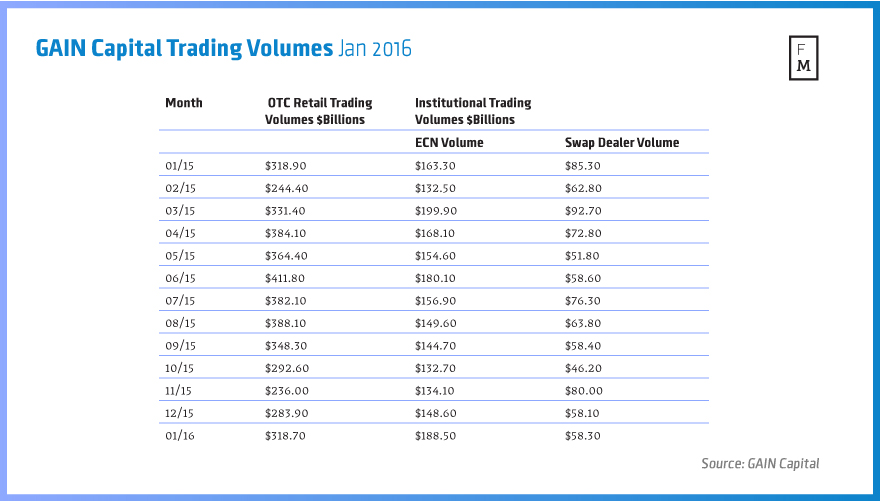 Starting from the release of the January 2016 metrics, GAIN Capital is reporting its institutional trading metrics with a new methodology. Volumes on the company’s institutional foreign exchange Electronic Communications Network (ECN) platform GTX, are divided into two categories – ECN volume and Swap Dealer.

The ECN volume presents the amount of spot FX and non-deliverable forwards (NDFs) trading executed through GTX. GAIN Capital is executing the NDF trades through its Swap Execution Facility.

On previous occasions, GAIN was reporting its total institutional volumes on a double-count basis, while the company’s Swap Dealer trading volumes were represented in a single count.

A Strong January for FX and CFDs Brokers

The month of January has proven to be very strong across the whole industry. With significant headwinds in financial markets, brokerages fared rather well as trading activity amongst retail traders increased in tandem with volatility.

Nothing about Gain closing its MorAm dealing operation