FXCM has reported its November trading metrics. During the month, average daily volume (ADV) of its retail unit rose 7.3% from last month to $14.7 billion. The figures were also 5.8% higher than the same period last year. The $14.7 billion ADV number was the broker’s highest since July of this year. Overall, total retail volumes were $308 billion with tradable accounts dipping slightly by 0.2% to 188,397.

In its institutional division total volumes for November were $193 billion with ADV of $9.2 billion. Both figures were the highest since August of this year. November’s ADV were 19.9% than October and a whopping 125% above the same period last year. During the month, average trades were 37,507, 29% above previous month data. Trade calculated to an average order size of slightly above $245,000.

Overall, the institutional figures are similar to those of GAIN Capital, where the division’s performance outperformed that of retail. During the month, institutional volumes composed 39% of FXCM’s total volumes, which was the third highest percentage in company history. 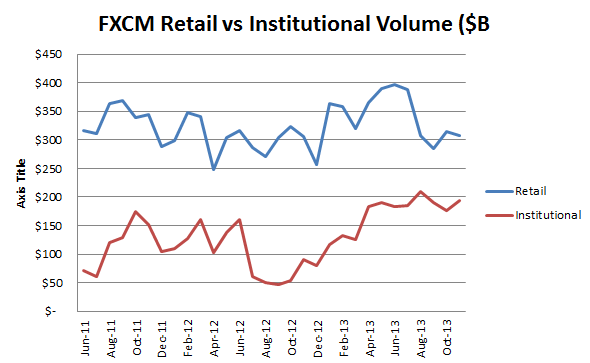 With FXCM volumes out, among larger brokers regularly reporting, only Alpari has yet to post its figures. Overall, despite firms mentioning to Forex Magnates during the London Summit that November has started strong, overall activity in the month among major brokers and trading venues has appeared to be only slightly better than October.