December 2015 was a recovery period for the Japanese retail FX business with trading volumes finally stopping their free fall after the abysmal previous couple of months. One of the largest brokerage groups in Japan, GMO CLICK Securities, has just posted its monthly metrics ending in December 2015, showing mild but positive figures. The total GMO CLICK volume reached in December 2015 was ¥0.856 trillion, up about 18% from the equivalent figure for November 2015 (¥0.725 trillion).

Similar to its rival Japanese brokerage group Monex that reported its volumes earlier today, GMO Click has rebounded from the lowest FX trading volumes for 2015 in November. Unfortunately for GMO the figure has remained below the ¥1 trillion threshold and even October’s ¥0.926 figure. On a year-over-year comparison the results are even more disappointing, as GMO Click was able to achieve ¥1.244 trillion in December 2014.

The value of exchange-traded contracts during the month of December at GMO Click also bounced back in December, to ¥502 billion, up 43% from ¥349 billion in November.

In November, GMO Click also reported its financial metrics for the month ending October 2015, which showed a collapse in its revenues MoM. GMO Click yielded a monthly revenue of just $17.93 million (¥2.2 billion) in October, representing a loss of -20.1% MoM from $22.41 million (¥2.7 billion) in September 2015. 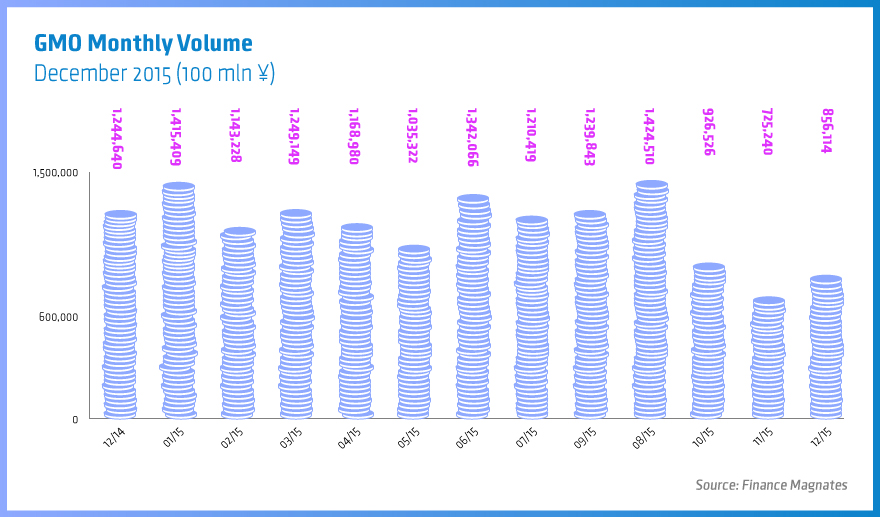