Fullerton Markets, a New-Zealand based forex brokerage, today announced an extension of its sponsorship deal with The Hurricanes, including a front of jersey sponsorship for all their home games for the next 3 years. 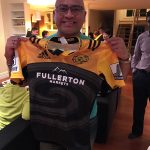 Fullerton Markets, a licensed financial services provider, was founded by former analyst and forex coach Mario Singh, who launched the new brokerage early last year. Localized in several regional languages including Chinese, Thai, Indonesian and Vietnamese, Fullerton Markets introduced a new breed of brokerage into the region, with the aim of breaking into a market with an apparent need for fair trading.

Since the company’s launch, CEO Singh has been actively raising the company’s profile worldwide and was happy to reveal the latest partnership deal. He commented: “As reigning Investec Super Rugby champions, the Hurricanes have demonstrated qualities like resilience, commitment and teamwork. As a world-class brokerage, we resonate deeply with these qualities as well.”

“After joining the Hurricanes family of sponsors last season it was an easy decision to up the ante in 2017 and become the front of jersey sponsor for all the home games. We can’t wait to see the team run out in Brisbane with the Fullerton logo on the front of their jersey.”

He further explained: “We really felt like we were part of the Hurricanes family in 2016 and, like all the other fans at Westpac Stadium this season, we’ll be right there with the team every step of the way. We’re looking forward to seeing the Canes defend their title this year!”

Hurricanes chief executive Avan Lee said the support of Fullerton Markets was highly valued as the club looked to raise the bar even further in 2017.

Lee said: “Fullerton Markets represents excellence and that’s what we want our club to be all about. We were delighted with our relationship last season and it’s great that Fullerton Markets will become a front of jersey sponsor for the next three seasons.”