The GBP hunted down the 0.70 psychological level against the euro yesterday falling just shy by 14 pips. With quantitative easing having started on Monday thanks to the ECB, the markets are focused on the monetary policy divergence between Britain and on the euro hitting new multi-year lows against the US Dollar as well. In just a month the EUR/GBP has fallen more than 400 pips which for this pair is a significant move over 5 percent.

With the ECB out of the way, all eyes were focused on Bank of England Governor Carny to determine the direction of the sterling. He reiterated that while inflation is low and could continue close to zero for some months that output growth remains solid and that a gentle rise in the bank rate later in the year is consistent

Yesterday we had weaker than expected UK data with manufacturing production falling by 0.5 percent and industrial production also printing a 0.1 percent on the month of January. We were expecting the GBP/USD to print a new low yesterday having failed to break on Tuesday, and it duly obliged testing as low as 0.7014.

This is mostly due to dollar strength, though, rather than GBP weakness as the EUR/GBP hit new lows on the fact that the UK will raise its rate before Europe. We saw late in the European session some short covering but this looks like a brief respite for the EUR/GBP with lower targets around the 0.6550 level possible roughly around 2004 and 2007 lows.

Bearing in mind the upcoming election in the UK in May we would expect uncertainty to start weighing on the pound soon but, in the meantime, it looks like there is still some distance to go before a more significant low in the EUR/GBP and a multi-week/month rally occurs. With more than two million UK citizens living in Europe is it time to change your holiday money?

Looking at the long term weekly EUR/GBP chart we can see that an imminent completion of five-waves down from the highs in 2013 is close at hand and should lead to a stronger recovery in the coming weeks. With the RSI showing that the EUR/GBP has been oversold since the beginning of the year we should be aware that a low may soon be in place, especially with upcoming weakness from the general-election uncertainty bound to weigh on the pound. 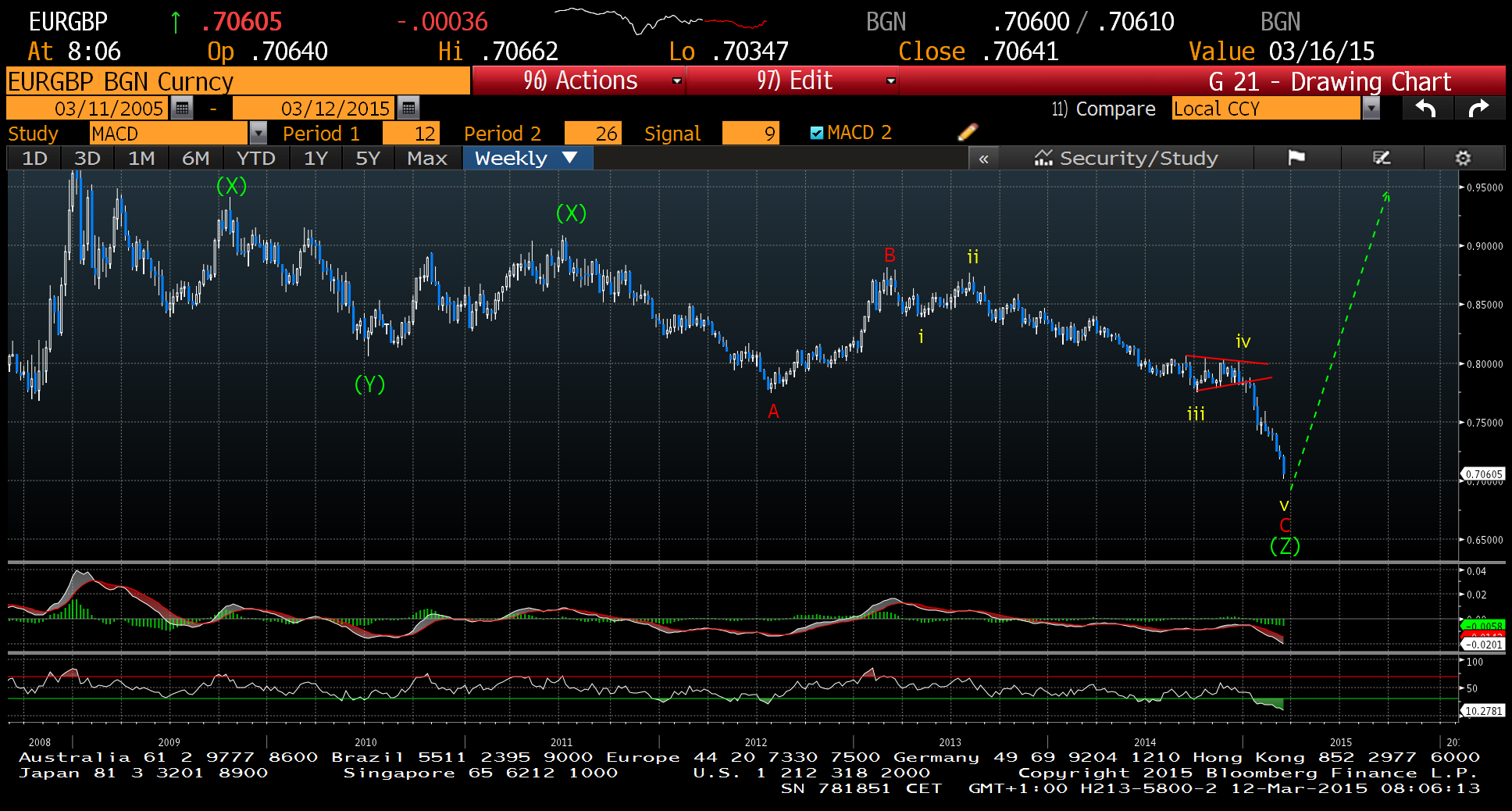 Looking at the short term chart, however, it would appear that this low is not yet in place. We can see that yesterday’s short covering simply completed a wave 4 (or soon will) for another new low as we complete wave 5 of 3. Look for any bounces in the EUR/GBP to sell into as we continue lower in the coming days before finally completing 5-waves lower and seeing a more considerable retracement–as the weaker euro eventually results in stronger regional economies such as Spain and Italy. So although it’s not time to change your holiday money yet it’s not far away against this euro.

Share this article
Tags: brokers / gbp
Got a news tip? Let Us Know