Commodities from crude oil to gold and silver surged this past week, as the US dollar was crushed by disappointing nonfarm payrolls that all but assured investors the Federal Reserve would not raise interest rates this month.

US employers added 151,000 nonfarm payrolls in August, slightly below forecasts calling for 180,000 and well below levels the Fed would consider strong enough to raise rates at its next meeting September 20-21. Currently, traders are pricing in a less than one-in-five chance the Fed hikes rates in September, according to the CME FedWatch tracking tool.

The US dollar closed higher on the day the jobs report was released before plunging after the Labour Day holiday. The dollar index fell more than 1%, reaching fresh two-week lows.

A weak dollar drove large gains in precious metals, with gold futures reaching three-week highs north of $1,350.00 a troy ounce. The yellow metal spiked nearly $30 after the US holiday weekend before consolidating lower in subsequent sessions. As of Friday, December gold futures were trading around $1,342.00 a troy ounce.

Silver’s rally was even more dramatic, as the grey metal reached the $20 mark for the first time in a month. December silver contracts were last seen trading around $19.70 a troy ounce, having gained over 5% through the first week of September.

September has been a rollercoaster for crude oil, which continued to benefit from speculation that Russia and Saudi Arabia were moving toward a unified production freeze. Energy ministers from both countries agreed to “historic” cooperation earlier this month. This included setting up a working group to monitor the crude oil market and suggest recommendations for stabilizing prices.

The biggest decline in US commercial crude inventories since 1999 combined with production-freeze optimism to propel oil prices back toward $50 a barrel. Since September 1, Brent international crude futures have spiked nearly 10% to climb above $50 for the first time since mid-August. The futures contract was trading at $49.71 a barrel at the time of writing. 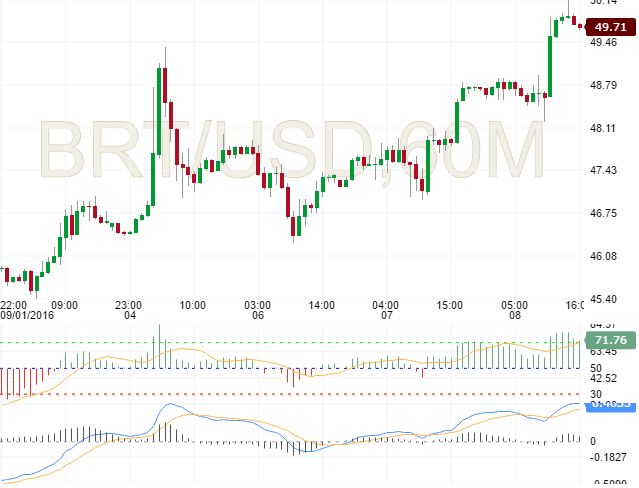 The US Energy Information Administration (EIA) reported Wednesday that crude stockpiles fell by 14.5 million barrels last week to 511.6 million, confounding expectations for an increase. The massive drawdown was attributed to a large decline in crude imports due to weather disruptions in the Gulf of Mexico. This has many analysts expecting a large spike in inventories next week.

The economic calendar has some crucial events in the coming week. Reports on US retail sales, Chinese fixed-asset investment and British monetary policy may all trigger volatility in the US dollar and commodities.