Gold prices have declined sharply in recent weeks, giving back some of their post-Brexit gains as risk sentiment quickly returned to the financial markets. 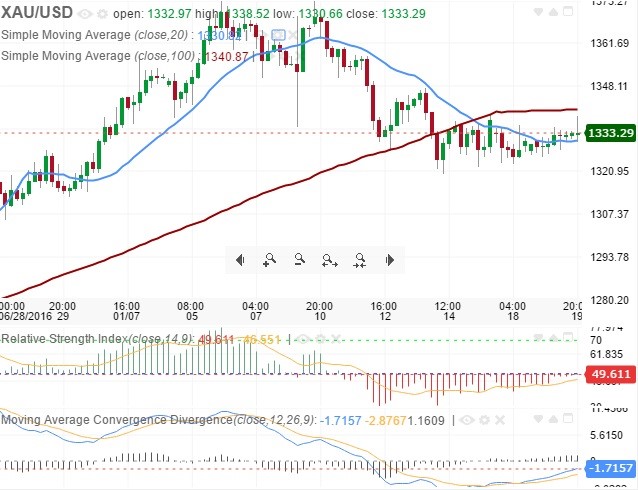 Spot gold, the price paid for immediate settlement, was last seen trading around $1,333.00 a troy ounce, having declined over $30 from its post-Brexit closing high. The yellow metal has seen its outlook deteriorate in recent weeks as investors returned to equities and so-called risk-on assets.

Relative strength is holding steady below the 50 level, while the MACD continues to show negative momentum. Price action has also weakened, with the 20-day simple moving average crossing below the 100-day SMA.

Unlike gold, silver prices have maintained most of their gains over the past two weeks, even going as far as setting new two-year highs during that period. Silver prices settled below $20 an ounce on Wednesday for the first time since July 7.

Silver has steadily outperformed gold over the past 30 days. The gold/silver ratio that is used by investors to determine entry into precious metals has declined nearly 10% over the past month and at one point reached its lowest level in nearly two years. As of July 19, gold’s premium over silver was 65.64.

Gains in precious metals have been difficult to come by in recent weeks as US stock markets staged consecutive record highs, a clear sign that post-Brexit jitters had faded. The S&P 500 Index recorded five all-time highs in the seven days through July 19, as implied volatility plunged to its lowest level in more than a year.

Japanese stocks have also staged a massive rally over the past week-and-a-half stemming from Prime Minister Shinzo Abe’s landslide upper house election victory on July 10. The Japanese Nikkei 225 Index has surged nearly 10% over that period.

Gains in Japanese stocks have been accompanied by sharp declines in the yen. This inverse relationship is seen during periods of risk-on trading. The USD/JPY exchange rate has advanced 5% since Abe’s election win.

Prime Minister Abe has promised to expand his government’s record stimulus package later this year. By forming a “super majority” in the upper house, Abe’s regime should have no difficulty implementing its desired stimulus reforms.

A stronger dollar adds to the long list of challenges currently limiting gold’s continued upside. The dollar index, which tracks the performance of the US currency against a basket of six rivals, traded above 97.00 this week for the first time since early March.

In addition to the yen, the dollar has posted strong gains against the Canadian dollar and euro. Meanwhile, the British pound continues to hover around 31-year lows in the wake of the Brexit vote. The GBP/USD appears to have found a bottom near 1.29.

Monetary policy developments and economic data will continue to drive currency and commodities speculation for the remainder of the week. These forces will dictate investors’ risk appetite and could determine whether gold breaks from its moribund trading range.