A last-minute deal between members of the Organization of the Petroleum Exporting Countries (OPEC) in Algeria on Wednesday breathed new life into the oil markets, setting the stage for a dramatic short-term recovery.

Analysts have described the deal as “sketchy” because very little is known about how it will be enforced. Analysts at Goldman Sachs also said the deal has little bearing on where prices are headed. They maintained their year-end price target for WTI at $43 a barrel. Barclays also said the deal was all about saving face and represented a “last ditch effort to kick the can further down the road and preclude market participants from positioning short during the coming shoulder season.”

Shoulder season refers to a period of lower demand, as refiners undergo maintenance and switch over to winter production.

Whatever the case may be, there is no quick fix in a market that is still oversupplied with crude.

Global benchmark Brent crude surged nearly 6 percent after the deal was announced to close at its highest level in three weeks. The futures price extended gains on Thursday and was last seen trading at $49.48 a barrel. 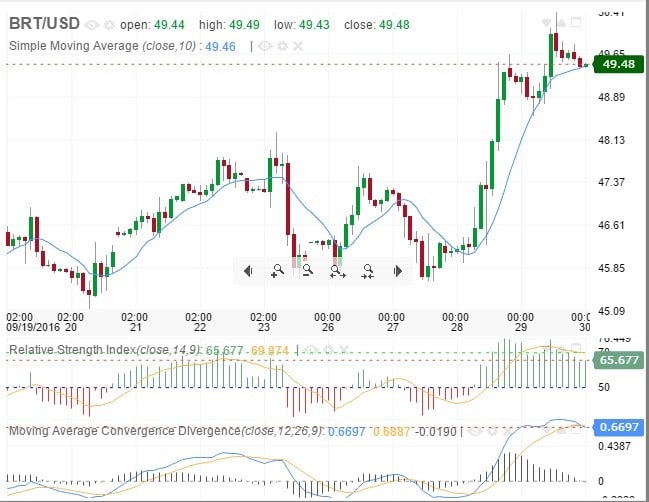 The West Texas Intermediate (WTI) benchmark for US crude futures experienced a similar rally, briefly touching more than one-month highs. The contract spiked more than 5 percent on Wednesday. At the time of writing, WTI futures were trading at $47.55 a barrel.

On Wednesday the US Energy Information Administration (EIA) reported another big draw in weekly crude stockpiles, which added to oil’s recovery. Crude inventories declined by 1.9 million barrels in the week ended September 23. However, gasoline inventories bucked the trend, rising by 2 million barrels.

Meanwhile, the US dollar provided little resistance to the crude-oil rally this week. The greenback rose only modestly against a basket of peers, reversing some of its losses at the hands of the FOMC decision to keep rates unchanged. Oil futures are priced in US dollars and are therefore sensitive to fluctuations in the currency.

Production-freeze optimism will likely run up against growing skepticism that OPEC will succeed in rebalancing the market. Analysts contend that oil prices will remain volatile until the November 30 OPEC summit, where major producers are expected to outline production caps. With a firmer floor beneath crude prices, US shale producers may use this opportunity to restart drilling activities. This could undermine the very basis of OPEC’s agreement and bring us back full circle.