US oil futures have rebounded nearly 70% from their mid-February lows, but major banks warn the latest rally has been drastically overdone, suggesting that the market could experience a renewed slump in the short-term.

Since bottoming near $26 a barrel on February 12, US oil futures have put together a massive rally. The West Texas Intermediate (WTI) benchmark for US crude futures set multiple yearly highs in April, as investors continued to rally behind the prospect of a production freeze among major producers. 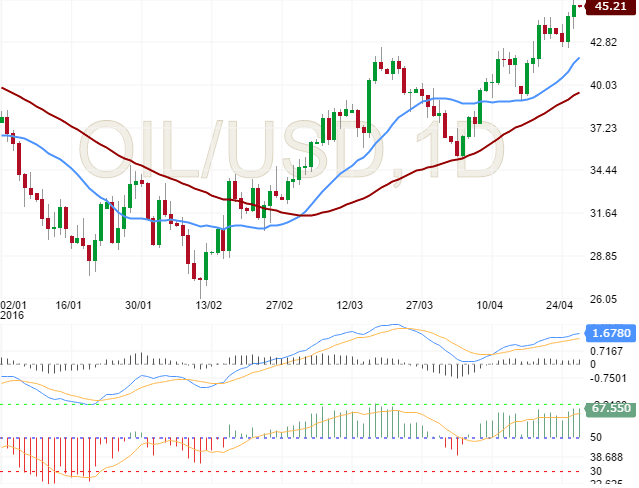 The Doha Initiative came and went on April 17 without any agreement on a production freeze, as Saudi Arabia played hardball with regional rival and fellow OPEC producer Iran. While oil prices declined initially, the rally continued for the next two weeks, taking prices to new highs. However, according to analysts, the latest rally is bound to fade because it hasn’t been driven by market fundamentals. In other words, the oil market is still oversupplied and is expected to remain so for the foreseeable future.

Take the following warnings from major banks Goldman Sachs, Barclays and Morgan Stanley as a case in point.

“While this recent rally has the potential to run further to the upside … we believe that it is not yet driven by a sustainable shift in fundamentals,” Goldman Sachs said in a note to clients on April 22.

A few days later, analysts at Morgan Stanley issued the following warning: “Non-fundamental rallies can last for several months and near-term catalysts may be lacking, but a macro unwind could cause severe selling given positioning and the nature of the players in this rally.”

Analysts at Barclays issued a similar warning the very same day: “Still-elevated inventory levels, the return of some disrupted supply, further boosts to Saudi and Iranian supply, and increased non-OECD product exports all have the potential to move prices lower over the next several months, especially if broader macro sentiment shifts.”

The short-term energy outlook, courtesy of the US Energy Information Administration (EIA), seems to reflect these concerns. The EIA said in April it expects WTI crude futures to average just $34.60 a barrel this year. Brent crude, the international benchmark, was projected to average just $34.73 a barrel. Both contracts were forecast to average below $41 in all of next year.

With OPEC production increasing in March on higher output from Iran and Iraq, there is cause for alarm that the latest market rally has been a tad overdone. While most analysts agree that the market has established a firm bottom, the fundamentals don’t suggest that a surge of this magnitude is justified. This should make for an interesting few months.

OPEC’s next meeting is scheduled for June 2 in Vienna, Austria.