It has been a rough couple of weeks for gold futures, as skittish investors digested mixed signals from Federal Reserve officials about the pace and timing of future rate hikes.

Gold for December settlement, the most actively traded futures contract, declined in six of seven days through Thursday, September 15. The declines amounted to around 2.6%, as the yellow metal reached its lowest level in two weeks. 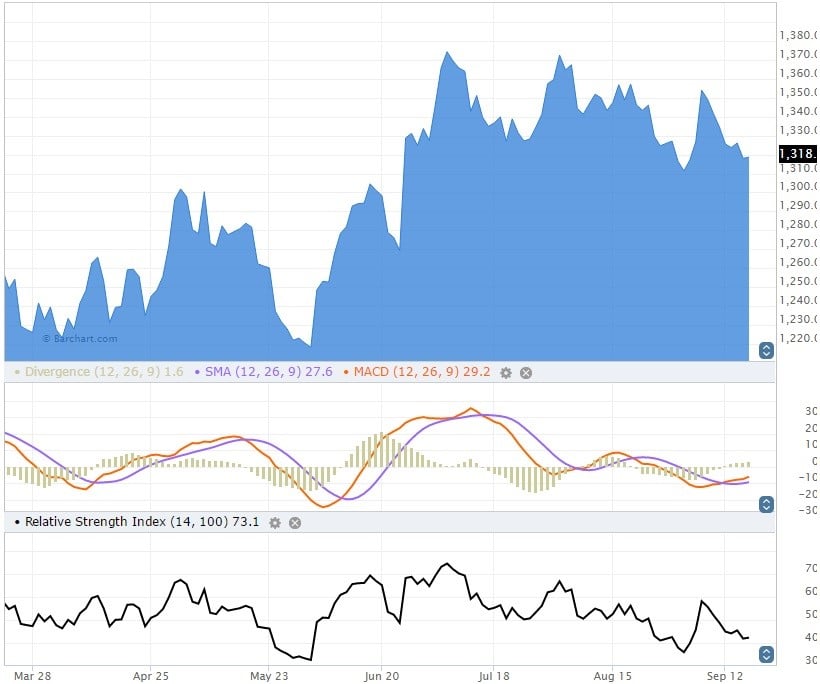 Silver prices have succumbed to similar pressures, as lower risk appetite in the financial markets weighed on investor sentiment. December silver futures have declined nearly 6% from the September 6 close of $20.14 a troy ounce, which was also the metal’s highest settlement since August 10. At the time of writing, silver prices were hovering just north of $19.00 a troy ounce.

Weak safe haven demand and speculation surrounding Federal Reserve monetary policy have weighed on precious metals over the past week. The release of disappointing US economic data on Thursday helped spark a brief recovery in gold prices before bearish sentiment returned.

Investors have been getting mixed clues about the pace and timing of US interest rate increases. Earlier this month Fed Bank of Boston President Eric Rosengren said he backed gradual rate increases, and warned about the downside risks of waiting too long to tighten policy. Rosengren’s comments sent Fed Fund futures prices soaring and helped ignite the biggest equities selloff since Brexit.

On Monday the tables turned when Fed Governor Lael Brainard argued for continued low-rate policy. In a prepared speech on September 12, Brainard said: “Weak inflation and an uncertain economic climate requires “prudence in the removal of policy accommodation,” Brainard said.

Rosengren and Brainard are both members of the Federal Open Market Committee (FOMC) that will be voting on US interest rates September 20-21.

Rate-hike deliberation has also supported the US dollar, making greenback-denominated commodities, such as gold, more expensive for foreign investors. The dollar index, which evaluates the strength of the US currency against a basket of six rivals, reached a more than one-week high on September 13. The index continued to trade well north of 95.00 at the time of writing.

Precious metals continue to trade in a range and are likely to remain so without a major trading catalyst. The tone of the Federal Reserve’s September rate statement on Wednesday could very well be that catalyst.