Coffee futures are riding five-week highs, as the combination of a weak US currency and short-covering have aided dollar-denominated commodities. 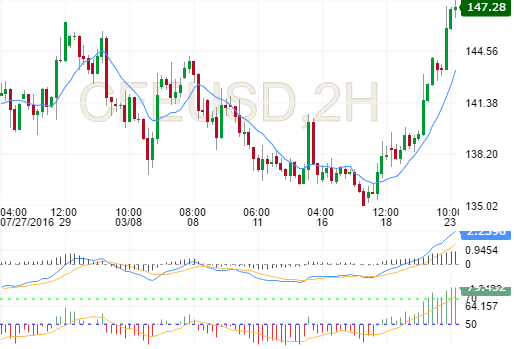 Arabica, the highest quality bean traded on the ICE Futures exchange in New York, was trading north of $147.00 a pound by Wednesday, a five-week high. Since bottoming out at three-week lows on August 17, coffee prices have rebounded about 7%.

Coffee futures are strongly bullish according to the short-term momentum indicators. Price action is on a clear upward trajectory and the MACD shows accelerating momentum.

A plunging US dollar provided the necessary catalyst for coffee’s latest rally. The US dollar index, which tracks the performance of the greenback against a basket of six major currencies, reached a nearly two-month low in mid-August, as investors continued to doubt the probability that the Federal Reserve will raise interest rates this year.

As it currently stands, traders are pricing in a more than one-in-two probability that the Fed hikes in 2016, according to the CME FedWatch tool.

Coffee prices have been anything but stable this year, with major roasters feeling the ill effects of the market’s general downtrend since the end of 2015. J.M. Smucker Company, America’s biggest coffee roaster, posted disappointing first quarter fiscal 2017 revenue of $1.82 billion, missing analysts’ forecast of $1.89 billion. The figure also marked a 7% year-over-year decline in revenue.

Since peaking at multiyear highs above $220 a pound in October, ICE coffee futures have been on a wild rollercoaster ride influenced by weather patterns and other economic forces. Prices were cut in half in early January, bottoming out near $111 a pound before staging a gradual recovery.

Unlike robusta, a cool word that describes the more bitter bean used in instant coffee, Arabica beans have seen a good harvest in 2016. Droughts in robusta-producing regions, such as Brazil, resulted in a large contrast between the two beans earlier this year. This prompted the International Coffee Organization to raise concerns around a possible supply shortage of robusta beans. Coffee experts – not connoisseurs, but actual market analysts – don’t expect the price of robusta to appreciate rapidly this year because there are large inventories of the bean in places like Vietnam.

Coffee enthusiasts should continue monitoring the climate patterns of key producing regions in Asia and South America to determine the outlook on prices. They can rest assured knowing that this market is likely to experience consistent growth as our addiction to caffeine grows.