Precious metals have downshifted this week, with silver prices trading at one-month lows as hawkish signals from the Federal Reserve and improved domestic data drove a large rally in the US dollar. 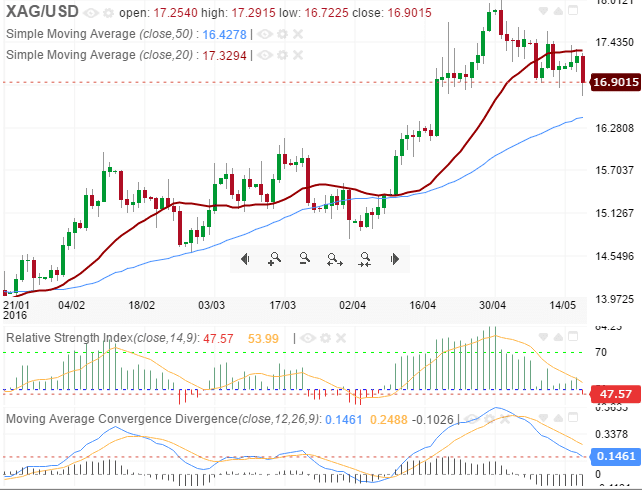 Gold futures plunged over 1% on Wednesday to settle at their lowest level in over three weeks. The decline followed a period of directionless trading that saw the yellow metal hover around $1,270 a troy ounce.

Meanwhile, declines for silver futures have been much more pronounced. The grey metal also fell more than 1% on Wednesday to close below $17 a troy ounce for the first time since April 22nd this year. Silver futures settled down at $16.93 an ounce Wednesday, the lowest settlement on the Comex division of the New York Mercantile Exchange since April 18th.

Since reaching a 15-month high of $17.81, silver has declined nearly 5%. While part of the decline has been attributed to silver being overbought, recent gains in the US dollar have also weighed on the precious metal.

The US dollar is trading near two-month highs against a basket of world currencies, having gained 2.8% since May 2nd.

The dollar index is a performance measure of the US currency against a basket of six rivals, including the euro, Japanese yen, British pound, Swiss franc, Canadian dollar and Swedish krona.

The greenback’s latest rally was driven by the minutes of the April 26-27 Federal Open Market Committee (FOMC) policy meetings, which suggested that US central bankers were prepared to raise interest rates as early as June provided that the economy continued to improve.

“Most participants judged that if incoming days were consistent with economic growth picking up in the second quarter, labor market conditions continuing to strengthen and inflation making progress toward the committee’s 2% objective, then it likely would be appropriate for the committee to increase the target range for the federal funds rate in June,” the official FOMC transcript said.

“Participants expressed a range of views about the likelihood that incoming information would make it appropriate to adjust the stance of policy at the time of the next meeting.”

Market participants are placing bigger bets on a June rate hike, according to the CME FedWatch tool. As of May 18th, traders saw the probability of a rate hike after the Fed’s June meeting at 34%, up from around 8% less than two weeks ago.

The Fed’s meeting minutes coincided with a slew of new data showing a strong rebound in the US economy at the start of the second quarter. The Commerce Department reported on May 17 that consumer inflation rose in April at the fastest pace in three years while industrial production also rose at the fastest clip since November 2014.

Investors may expect much more data-related volatility for precious metals in the coming weeks. The performance of the US dollar will, therefore, be key in gauging short-term trends in gold and silver prices.

Some important data releases to monitor over the next two weeks include US durable goods orders, revised first quarter GDP, factory orders and nonfarm payrolls.