The December Natural Gas futures contract is going through, which has to be one of the most volatile one-month price swings in recent history. The price action in October has spared no one with both bearish and bullish traders having equal opportunities for tremendous profits and losses. And if you were blessed to catch both sides of the trade then more power to you.

The futures contract ended September at $3.132, facing growing downside momentum, and in a position to continue the weakness into October. Traders were facing the end of the summer cooling season which featured lingering heat that helped trim some of its excess supply while raising optimism that any kind of a normal winter could eventually lead to a shortfall by the end of February 2017.

Speculators saw the same potential in the fundamentals and on the charts because on the first day of the new month, October 3, the market traded down to $3.112 then promptly turned around and closed higher for the session, forming a potentially bullish closing price reversal bottom.

Speculators came into the market in droves as a bullish winter weather forecast encouraged heavy buying by hedge funds and small speculators alike. The major news services picked up the story, attracting even more speculators as buyers fed on short sellers who were playing for a typical fall weather market.

Yes, in hindsight, it appears that inexperienced traders somehow missed the memo that we are still in the fall season. This is the season that typically features weather that is not too hot and not too cold. What this essentially means is that temperatures are not hot enough to encourage the use of air conditioning or cold enough for consumers to turn up their heaters.

During a normal year, natural gas traders expect to see low demand in the fall and a build in inventory because producers usually continue to inject natural gas into storage. This year, however, due to cutbacks in production, the supply build was expected to be slower. This appears to have been interpreted by speculators to mean that the natural gas market would begin the winter heating season with inventory at lower levels than previously anticipated.

So given this new information, speculators continued to buy December Natural Gas futures until October 14 when the rally came to an abrupt stop at $3.556. Then the bottom of the market fell out, fueled by aggressive profit-taking and fresh short selling after a dramatic change in the weather forecast.

Instead of playing for an early start to winter in November and the possibility of the coldest temperatures during winter since 2014-15, speculators were now facing a new weather forecast that called unseasonably warm temperatures until at least mid-November. This triggered a huge sell-off that brought prices down to $2.972, its lowest level since late May, essentially wiping out five-months’ worth of gains in eight trading days. 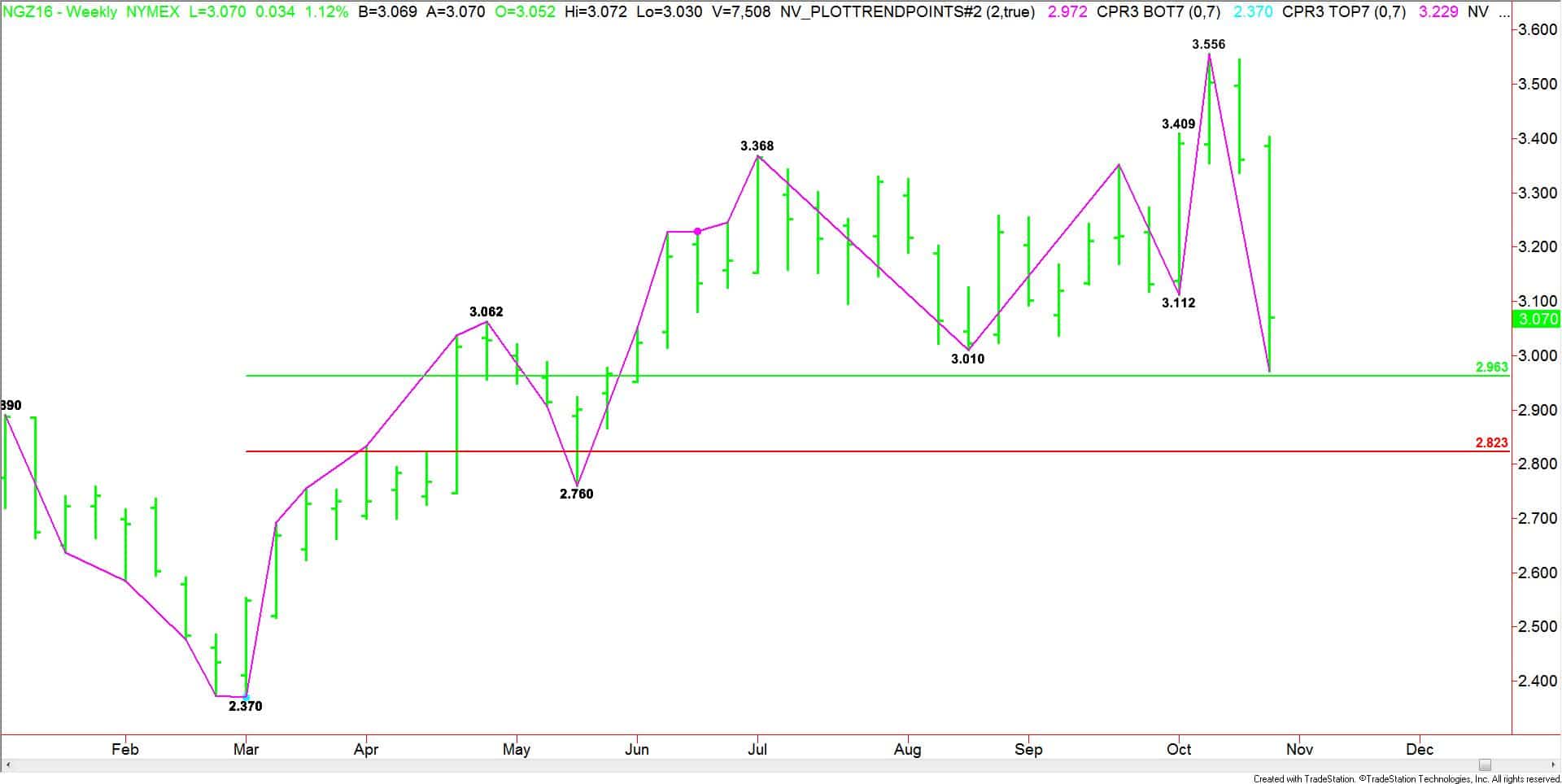 Despite the volatile price action in October, all is not lost for bullish traders. Stepping back and looking at the charts, one could say that all is not lost if you were able to hold on to your trading capital. This is because the market is currently in a position to test a major 50% to 61.8% retracement zone at $2.963 to $2.823 that could be very attractive to speculative buyers.

Although the price zone may be attractive to buyers, we’re still going to need to see cold temperatures put back into the forecast in order to start the rally all over again. So going into November, we’re going to see December natural gas prices at favorable price levels, but without cold weather in the forecast, the market has little chance to rally and is likely to trade rangebound.

We could see the start of a rally from this support zone if the new forecasts call for an early start to winter in November and a cold or colder than normal winter beginning in December.

Prices will continue to tumble, however, if there is no early winter and the unseasonable temperatures are forecast to continue into December and January.

In October, the price was right for a rally, but the time was wrong. In November, the price may be favorable again and the time may be right, but without a dramatic change in the weather from unseasonably warm to cold, the natural gas market may have seen its high for the year.

Despite Volatile October, Natural Gas Still Offers Upside Opportunity
James A. Hyerczyk is a financial analyst for FX Empire, a leading financial portal. James has worked as a fundamental and technical financial market analyst since 1982. His technical work features the pattern, price and time analysis techniques of W.D. Gann.
wpDiscuz