Cotton is the soft fiber that grows around the seeds of the cotton plant. Cotton is most 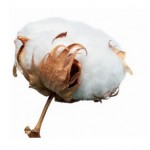 often spun into thread and used to make a soft, breathable textile, which is the most widely used natural fiber cloth in clothing today. Africa and South America are large providers of cotton.

Cotton futures have been trading in the U.S. since 1870 at New York’s original futures exchange. The NYBOT cotton options market, opening in 1984, represents one of the most active agricultural options markets in the world.
Although in the past, there were many state cotton exchanges, the NYCE and the Memphis Cotton Exchange are still in operation today.

Successful cultivation of cotton requires a long growing season, and production of the crop for a given year usually starts soon after harvesting the preceding autumn.

Cotton trading contracts are for March, May, July, October, December (Current month plus one or more of the next 23 succeeding months). The last cotton trading day is seventeen business days from end of spot month.

Cotton Corporation of India (CCI) sold 1,100 bales on the first day of auction creating international curiosity in the days.

According to an official notification, CCI initiated electronic auction on January 27th to sell an initial quantity of 5,100 bales (170 Kgs each) at a price higher than the market. The initial variety to be disposed is Bunny Brahma (31mm in length), which is normally suited for fine counts.

The reason for this is that the main consideration for spinners and cotton merchants is to have price stability. The excess cotton production in India and the recent China import policy has brought enormous price instability at this time, compared to the previous year.

As is clearly visible in the charts above, cotton prices have plunged since May 2014. The reason is very simple. Global reserves were at an all-time high and India became the world’s largest producer. At the same time, China cut imports because of record inventories.

What’s Next for Cotton?

The National Cotton Council’s survey of U.S. cotton producers is underway. Results that will be released on February 7th could be expected to predict a decline in acreage for the 2015/16 season. In terms of production, a decline in U.S. plantings may be partially offset by improved growing conditions in West Texas.

Rainfall in the region was higher than average during the 2014 calendar year, and if rain continues to fall in 2015, lower abandonment rates and higher yields could be possible in that part of the cotton belt.

Lower acreage and production in 2015/16 may inhibit further increases in stocks in certain exporting countries next crop year. Since India’s acreage has only been flat or higher in recent years, India may prove an exception.

Given limited Indian warehousing capabilities, the more Indian cotton that is produced and in search of buyers, the greater the downward pressure there may be on both Indian and world prices.

[…] with the social calling and messaging aspect of Viber, similar to Chinese firm Tencent with its WeChat messaging […]

[…] many expected, WeCaht and its mother company Tencent are slowly becoming more and more of a direct competition to Alibaba and its payment entity Alipay. […]

Commodities Corner (Part 2): Cotton Market from A to Z
wpDiscuz