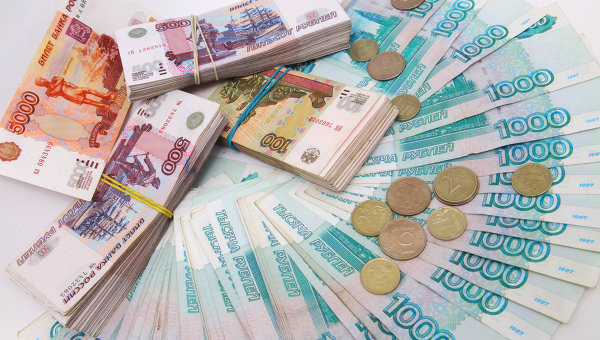 The recent political crisis hitting the streets of Kiev has been contributing to an ongoing shambles in Russia’s currency. The ruble has hit fresh lows against the Euro and the US dollar as a declining economy and volatile currency lose hope from global investors. In a week where the ruble weakened 1.3% against the greenback, trading activity was equally flamboyant. In the NDF market the dollar-ruble saw volumes at one executing venue exceeding $75 million, at the same time in the global futures market, daily volume crossed the $110 million mark.

Russia seems to be making the headlines for all the wrong reasons, President Putin’s government hosts the most expensive winter olympics in a bid to show the world what the future holds in the form of emerging markets. However, the fierce official hasn’t been able to succeed on the economic front. In 2013 the economy only grew 1.4%, and a recent announcement by the Russian central bank was more gloom for the nation, as GDP growth for 2014 was slashed from 3% to 1.8%.

Although the ruble has been deteriorating against its major counterparts since December 2013, the last few days have been tougher for the country as volatility in the ruble strengthened due to the chaos ‘next door’. This resulted in sharp swings in trading activity as seen through volumetric data at SEFs where NDFs are traded in the United States. 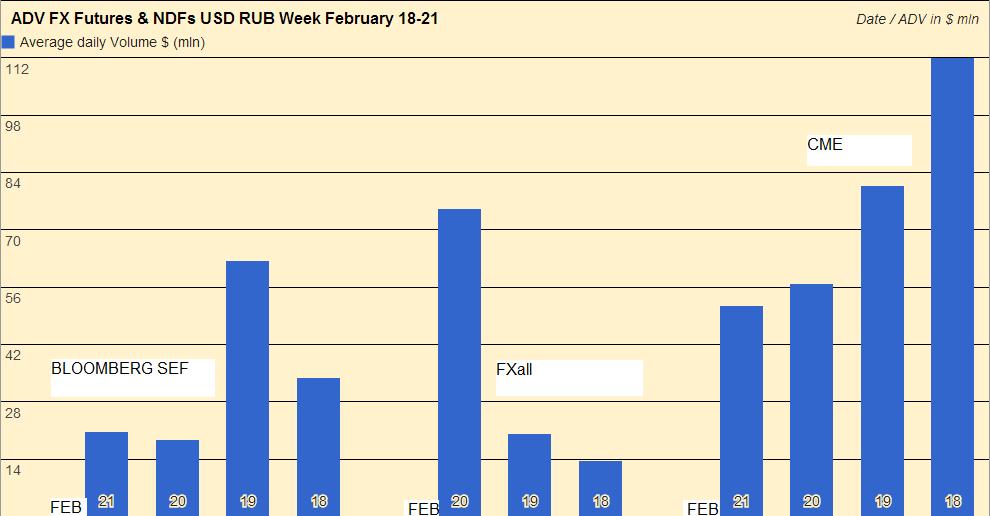 The 20th of February was the most liquid day at FXall’s SEF, where the USD RUB non-deliverable forward contract traded in excess of $75 million. Over 70 people were reported dead as a result of the protest that shook Kiev. Bloomberg’s SEF also saw a sharp rise in volumes, on the 19th of February it saw average daily volumes cross $60 million. On the other hand, futures traders were steady throughout the week, however on Friday the 21st they entered the market pushing volumes above the $110 million mark.

Darya Zhelannova, an analyst at Alpari, spoke to Forex Magnates about the sharp rise in trading volumes, she said: “Trading volumes on the ruble are rising significantly as the currency is attracting more speculators. Amongst the group of emerging market currencies, the Russian ruble looks the most stable.”

India‘s rupee was subject to price volatility last year when it plunged 20% against the greenback. Since the appointment of the new central bank governor in the autumn of 2013, the currency has slowly retracted, strengthening nearly 10% since its record lows in the summer of last year. Anuj Ojha, a currency trader at TNC Markets, believes the reforms have taken shape, he opines to Forex Magnates: “India is still not out of the slump, however we are well on our way back to the 55-57 range.”

The ruble has been one of the fastest growing pairs traded by international currency traders, activity at the main derivatives exchange in Russia has been growing exponentially and daily trading volumes are in the range of $12-16 billion. The ruble is ranked twelfth in the most recent BIS Survey for ‘Currency Distribution of Global Foreign Exchange Market Turnover’, jumping four places from the last survey in 2010 where it was positioned at 16th place.

According to the survey the USD RUB contract is the tenth most active currency with average daily trading volume of $79 billion.

The Ruble Crisis Is the Russian Economic Crisis

Critics believe Russia’s woes have been primarily triggered by poor governance, the energy centric country has failed to diversify its economy away from the oil and gas sector, and this has been coupled with the global tapering situation and Russia’s overall position in the region.

Anthony Cheung, Market Analyst at RanSquawk, commented to Forex Magnates about Russia’s current economic state: “At present, Russia is suffering from a period of stagflation with CPI running at 6.1% Y/Y and economic growth at its slowest since 2009. As such I think they will be happy to intervene as and when the central bank deems necessary rather than rush into any all-out policy changes in the immediate future given the relative ‘room for manoeuvre’. Short-term weakness may also be beneficial in countering falling commodity exports in a country that relies heavily on its energy industry.”

The cost of credit and its endeavours were witnessed during the largest recession since the 1930’s. Russia faces a similar challenge in the form of debt owed to it by Ukraine. If the trouble continues in Ukraine, then Russia will be forced to extend its credit lines or face the unwanted and accept a cheque from its neighbor that would most likely bounce! Market experts believe that Ukraine’s debt to Russia is in excess of $15 billion.

Russia like many emerging and frontier markets is facing the difficulty of capital outflows as investors look to developed markets such as the US. The FED’s bond buying programme is expected to come to a halt and investor confidence in the world’s largest economy is back to pre-crisis levels.

Russia has been on the receiving end of the changing landscape with capital outflows exceeding $60 billion in 2013 alone. The tapering issue hasn’t been the only sensitive sign for the Kremlin, investors feel unsafe in a country that still holds a top spot in the global corruption index, despite Russia being a member of the G20. Russia sits comfortably at the 133rd place on the Corruption Perceptions Index (other countries at 133rd place include: Comoros, Guyana, Honduras, Iran and Kazakhstan) a benchmark devised and published by Transparency International.

Like Russia, Ukraine’s currency, the hryvnia (UAH), has been sinking, the last week saw the currency plunge near UAH9 to the dollar, closing on Friday at 8.9050 against the greenback. Ukraine has longer term issues sitting in the rift between Europe and Russia. Protesters have been battling against the government which is pushing forward a treaty with the Russians, against the wishes of the opposition and many Ukrainians.

Ukraine’s central bank has been trying its utmost to stabilize the currency, Aleksey Koval of Astrum Capital, a Kiev-based fund manager, explains to Forex Magnates: “The National Bank of Ukraine is trying to fight with devaluation of Ukrainian hryvnia. Earlier in the month the National Bank set a zero rate of reservation on short-term external borrowing, imposed temporary restrictions on buying the national currency in the interbank market and limited the terms of purchase currency by authorized banks on behalf of legal entities and entrepreneurs. Restrictions were also introduced on the implementation of banking customers to do transactions only in measures of money amounts in their current accounts at the beginning of the operational day.”

The Next Steps for the Ruble

Ms. Zhelannova is optimistic about the fate of the ruble, she expects the market to stay range-bound and not cross previous highs, she explained: “By the end of the year, the exchange rate should not fall below 35-36 against the dollar and 47-48 against the Euro.”

Despite its domestic issues Russia is in the hands of the US, like many other emerging market countries which have seen outflows as a result of the bull rally in the US which saw the DJIA cross record levels. Mr Cheung adds: “Looking ahead, if the Fed remains on track then tapering should be completed by around October of this year and as such give the Russian central bank time to ease into an eventual free float of their currency in 2015. Therefore, the step seems to be a logical move given the predicament of their domestic economy in the backdrop of the global macro environment of higher yields led by the US. Other more aggressive measures that would follow a similar direction may include increasing the rate of currency swaps, however this looks to be more an option if the currency were to see aggressive selling over a longer period of time.”

Margin FX trading has become a highly traded asset class among retail investors across the globe, this has been driven by the growth in online trading, access to information and user literacy. The majority of investors trade in G7 crosses, however with investors in regions such as Russia or India, FX brokers have expanded the instrument list to cater to the growing emerging market traders and offer CFDs in minor, exotic and emerging crosses such as the USD RUB. Spreads are usually much wider on less liquid crosses, at IG, the USD RUB contract has a minimum spread of 200 pips, according to the firm’s website.