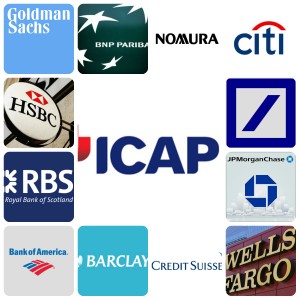 The world’s largest banks have once again been accused of manipulating financial markets.

In the latest case, 13 banks, including Barclays, Bank of America (BoA) and Citigroup, are being sued by ‘The Alaska Electrical Pension Fund’ (AEPF) in a US court. The charges filed allege the banks conspired to manipulate ISDAfix rates to their advantage – a benchmark used to price various financial instruments in the interest-rate derivatives markets. The AEPF alleges the banks’ actions affected “trillions of dollars of financial instruments tied to the benchmark.”

In related news covered by Forex Magnates, various banks have already been embroiled in regulatory investigations related to Forex (FX) manipulation, LIBOR fixing and mis-selling of mortgages in the US and UK over the past 7 years.

The Usual Suspects at It Again

In revelations that have an eerie resemblance to the LIBOR fixing scandal, staff working for the 13 accused banks allegedly “communicated via private chat rooms” and “used digital communications to “submit identical quotes beginning at least in 2009”, according to an official statement from the AEPF.

The pension fund intends to sue on behalf of all affected ISDAfix participants, from January 2006 to January 2014. Forex Magnates has learnt that the damages being sought are unspecified but could be tripled under US antitrust law.

The Riggers and the Triggers

Also included in the court case is ICAP Plc, a UK-based broker-dealer clearing over $1.3 trillion in daily transactions. It is alleged that ICAP helped facilitate the manipulation of ISDAfix rates given the company’s prominent and dominant position in clearing transactions in the interest-rate derivatives markets.

Recorded telephone calls and e-mails reviewed by the Commodity Futures Trading Commission (CFTC) show that traders at the thirteen banks instructed ICAP brokers to buy or sell as many interest-rate swaps as necessary to move ISDAfix to a predetermined level.

Such steps, the pension fund states in filed court documents, could not have happened without “some form of advanced coordination.”

“Even if reporting banks always responded similarly to market conditions, the odds against contributors unilaterally submitting the exact same quotes down to the thousandth of a basis point are astronomical,” it was added. “Yet, this happened almost every single day between at least 2009 and December 2012.”

The court case continues and is expected to conclude sometime in 2015.

[…] is one of the fastest growing Ecommerce markets in Latin America and in 2013 showed an impressive 29% growth, resulting in a BRL 31.11 billion ($13.06 billion) market worth. Looking at Amazon’s track record […]