Towards the end of last year, the Central Bank of Russia, which acts as the regulator for the foreign exchange (forex) sector, essentially wiped out the retail FX trading industry.

As Finance Magnates reported, the regulator revoked the licenses of some of the top brokers in the country – Alpari, TeleTrade, TrustForex, InstaForex, and Forex Club all had their licenses suspended.

As Finance Magnates analyzed at the time, this move from the central bank effectively wiped out the local FX industry in Russia. So, with this drastic move, what is the current state of the forex industry in the country?

There is No Russian Forex Market

Forex trading is still prevalent in Russia, despite the central bank’s efforts to encourage residents to diversify their investments or completely move away from FX, demand in the country remains.

However, in terms of a local market in Russia, it is basically non-existent. The majority of FX trading volumes generated by Russian investors comes from brokers which are regulated outside of Russia.

This means that, while FX trading in Russia is still popular, most clients aren’t choosing Russia-based brokers. So, despite the fact that some of the top brokers, such as Alpari and InstaForex, had their licenses revoked, does this mean clients can no longer trade with them? The short answer is no. 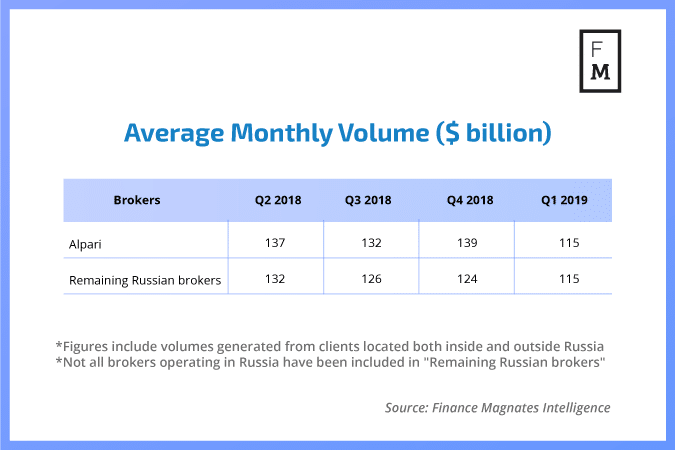 Speaking to Finance Magnates, a professional from the industry who preferred to remain anonymous said that besides a bit of negative press, the central bank suspending the license of these brokers, in reality, has little impact on trading activity.

“So they took these licenses away but in reality all they did, just a little negative publicity, it sounds bad, when the government takes away your Russian license. And also it took away their means of legally using marketing in Russian Federation. So let’s say cosmetically, it’s that damaging but all the volume as it was before the licenses were revoked, all the volume is offshore.”

Central Bank Has no Control Over Russia’s FX Market

The central bank has long been against the forex sector. Since around 2012, the central authority’s attitude towards the industry started to turn negative, as more and more brokers began setting up shop in the country.

But why did this happen? According to our source, the overarching reason as to why the Central Bank of Russia is not a fan of the sector, boils down to control.

“They are so against it because they cannot control it, they are unable to tax it… That is obviously something that every government wants. But the second thing is that there are a lot of scams going on in Russia.”

Have You Future Proofed Your Brokerage?Go to article >>

Can the Central Bank Choke the FX Industry?

However, with the central authority taking more direct moves to choke the FX industry in Russia, could the sector be nearing its end in the country?

According to our source, there doesn’t appear to be an immediate way in which the Central Bank of Russia could choke off the industry. However, they could make it more difficult for brokers.

“There is merit to these concerns in the sense that they might start employing more predatory tactics to sort of restrict foreign license owners in onboarding the clients. It is definitely possible, we have seen this. For example, one predatory method that we have seen, let’s say not the Russian bank used, but the government in general used. They used IP blocking of the website so that Russian people cannot access the website from a Russian internet provider.

As can be expected, it’s not easy to set up a broker in Russia, particularly for foreign brokers. In fact, for a new offshore broker, it is essentially impossible to break into the market.

Not only that, but the Russian forex license is not particularly appealing, as it only allows very low leverage of 1:50. Nonetheless, this is still better than in Europe. In addition, clients are required to come into the office of the broker to sign up. They aren’t able to do know-your-customer (KYC) over the internet, which is the industry standard across the world.

Considering how large of a country Russia is, this makes it extremely difficult to legally onboard customers, as they will need to have many branches throughout the country for clients to travel to.

So how do Russians like to trade forex? Beginner FX traders largely stick to trading on the Moscow Exchange (MOEX). However, more experienced traders tend to go offshore.

It might not come as a big surprise that in general, Russian FX traders are big risk-takers, go big or go home is an apt way to describe the overall trading behavior.

In terms of instruments, the EUR/USD and other major pairs are the most commonly traded, alongside other classic instruments such as oil and gold. When trading the Russian ruble (RUB), which is most commonly paired against the USD, traders opt for more regulated contracts, such as futures contracts.