In recent years, the controversial topic of alleged macroeconomic data felicitation by the Chinese statistics offices keeps returning like a boomerang. An attempt to overstate the most important indicators that assess the dynamics of economic growth or purchasing managers’ sentiments is widely covered by the world media. Adding to that, with the gossip about corruption and unauthorized use of sensitive data by the third parties, a really negative image of the Middle Kingdom’s credibility might emerge.

In the second part of 2015 much was said about the fact, that the results of Chinese GDP have been artificially inflated for many years. The illegal activities and attempts to mask weaker results probably involved local research institutes representing the particular administrative districts. Is that the main reason for the dynamic economic growth in China over last few decades?

Does China have something on its conscience?

In 2015, much attention has been paid to the yearly GDP forecasts. Although officials initially stated that the 7% barrier will be overcome without major problems, at the same time the independent analysts suggested that the results will come closer to 6.8%. Finally, gross domestic product was placed below the threshold established by the Chinese politicians, reflecting a very negative sentiment on global markets.

Allegedly, even the current lower readings may not have too much in common with the real condition of the economy. According to some statistical offices in the north-eastern parts of China, GDP landslides are caused by inflating the previous values in recent years. The aim was to cover up unfavorable growth, incompatible with the government’s propaganda.

Take Liaoning province as an example. In 2012 it noted GDP growth rate of 9.5% and few years later (2015), the same value fell unexpectedly to a mere 2.7%. Is it possible that a single region really declined so strongly in economic terms in just 3 years?

In addition to allegations of possible macroeconomic data falsification, China must also fend off accusations concerning the blockade of relevant indicators publication. At the end of last year, the PMI results published by the Caixin institute were suddenly banned. Interestingly, at the same time they have presented a strong decline in relation to the official governmental data. Two months later releases by another institute were blocked – this time Minxin. 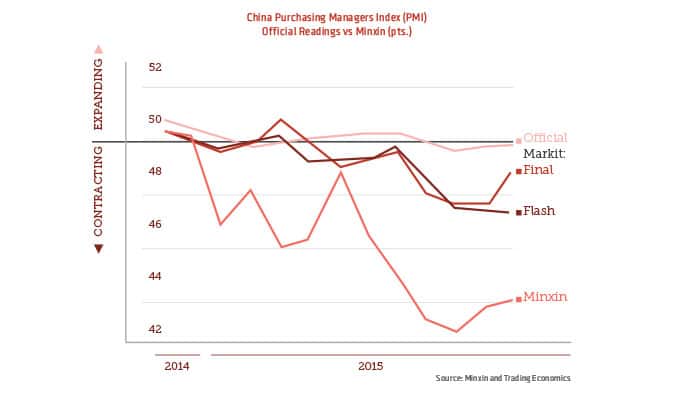 While the official PMI readings remained above the 50.00 level, the Minxin index fell well under 45.00 showing strong regression in the overall sentiment. Tomasz Wiśniewski, chief analyst at Alpari Group, thinks that in the market there is a strong suspicion that alleged manipulation can be the real issue: “Now every data from China that hits the wire is taken skeptically. Some traders say that those numbers completely lost relevance and can be more considered as a folklore rather than influential game changer.”

Facing an economic slowdown, the Middle Kingdom is trying to maintain its status of the fastest developing market. Unfortunately, this cannot be achieved by artificially inflating the most important macroeconomic data, or blocking those indicators, that show the wrong picture of the real economy. The question is, whether only the Chinese are guilty of this or the issue applies to other economies as well?