Photo: Playtech & Plus500 bail on the deal in the wake of the still pending FCA approval
Share this article

With Playtech announcing that it has reached an agreement to buy Plus500 for 400p in a deal valued at £459.6 million, it marks the second major foray into the forex and CFD industry for the gaming software operate after purchasing Markets.com (TradeFX). While the deal marks an interesting resolution for Plus500, given their stock price decline after running into regulatory problems with the UK’s FCA, the acquirer isn’t so surprising as they have been reported to be in takeover discussions with quite a few brokers.

With the deal announced, below are an array of quick thoughts in reaction to the news.

Markets.com/Plus500 Synergy? This is an interesting question of how compatible these two brokers are as they operate very distinct businesses. According to statements from Plus500 representatives to Finance Magnates in the past, 80% of the broker’s clients are acquired from search engine marketing (SEM). In contrast, Markets.com has a large emphasis on partnerships, both with introducing brokers, website affiliates and white labels.

Their technology also differs, with MetaTrader 4 being Markets.com’s main trading platform, while Plus500 uses a proprietary system. The trading platforms are key aspects of how each broker operates their business. Due to being SEM heavy, Plus500 operates automated bidding technology on keywords for acquiring new customers. The system integrates with their proprietary front-end platform to track long-term values of clients per geographic region and search keyword clicks to calculate the automated system.

In contrast, Markets.com offers more generic systems via their Keystone technology unit, including a CRM, MetaTrader 4, and webtrader platform. These systems provide turnkey solutions to their partners which can be branded, but with dealing and compliance handled by Markets.com. Therefore, on the surface, Plus500 wouldn’t seem to be a complimentary service in terms of technology.

Where we believe the synergy will take place is with compliance and CRM systems. In the acquisition statement, it was noted, “Playtech intends to provide Plus500 with CRM capabilities and expertise to maximise customer life time value and improve its standalone financial performance.” Therefore, what we expect to occur is that Plsu500’s SEM marketing engine will get integrated within the Markets.com CRM, with both brokers benefiting from the automated system. Also, with Markets.com’s existing experience handling compliance for their partners, Plus500 gains this knowledge in assisting them to get through their current regulatory problems in the UK. 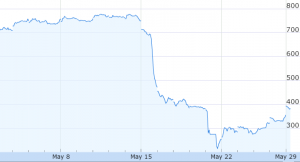 Higher Offers Coming? This is a question being asked around many trading desks this morning for several reasons. Firstly, shares of Plus500 were trading at 770p as recently as May 15th. Therefore, although Plus500’s board is backing this deal, it can be expected that they will be receiving some heat from shareholders for accepting a price that many are calling ‘opportunistic’ for Playtech. Secondly, while Playtech has made their M&A intentions known, they aren’t the only firm on the hunt, with major players such as GAIN Capital, IG Group and OANDA all having stated following the January 15th Swiss franc volatility event that they were looking at making acquisitions of fallen brokers. Therefore, while a case can be made why each of those three brokers isn’t going to make a bid for Plsu500, the industry is definitely in a period of consolidation with discussions taking place that could lead to another bidder emerging.

Does Odey Asset Management Hold the Keys to This Deal? The value fund manager has been the biggest buyer of Plus500 stock in recent days. Since Plus500 announced that it has frozen some UK client accounts due to compliance reasons, Odey’s James Hanbury, who manages the Odey Absolute Return and Allegra Developed Markets fund, has been an active buyer in the shares. The buying has led Hanbury to increase his holdings to 20% of shares compared to below 12% prior to the May 18th stock price plunge.

At Odey, Hanbury has developed a reputation as a rising star in the UK managed fund space. Since its launch in 2009, his Odey Absolute Return fund has averaged over an 18% annual return, putting it in the top levels of Morningstar 3 and 5 year tables for similar funds. The success led the Absolute Return fund to become closed to new investors, with the Allegra Developed Markets fund launched in 2013 to meet demand for Hanbury’s management performance. As the top holding in both the Absolute Return and Allegra Emerging Markets funds, Plus500’s recent share decline has been a drag on Hanbury’s recent performance. Therefore, holding 20% of the broker’s shares, Odey is in position to potentially push for better terms from Playtech, canvass bids from other brokers, or block an acquisition outright. 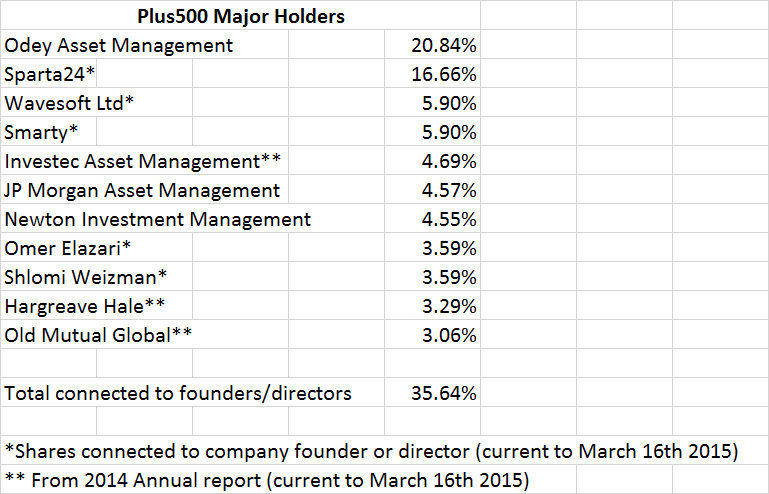 With Plus500 management holding 35.64% of shares as of March 16th, 2015 (based on data from their 2014 annual report), Odey would need to convince over 68% of the remaining shareholders to vote against a deal.

Losers? Prior to today’s news, there have been some whispers that other UK brokers were responsible for reporting Plus500 to the FCA in regards to their lax compliance program for AML and KYC requirements. Marketing themselves as a CFD broker, Plus500 has positioned themselves as a direct competitor to IG Markets and CMC Markets in the UK. Therefore, while those two names may not have had anything to do with Plsu500’s problems with the FCA, they probably weren’t complaining about seeing a competitor lose market share in their home UK market.

However, with Playtech swallowing up Plus500, IG and company now have a larger competitor to handle in the UK. With their existing network in the UK gaming world, Playtech could use those connections to market their new forex and CFD offerings in the country. Therefore, while the immediate value and synergy may not be on the table, one has to believe that IG is also reviewing whether to make an attempt to purchase Plus500 as a defensive move to block a much larger competitor. Unlike CMC which has IPO aspirations, IG is already public, which provides it the currency to make an offer.