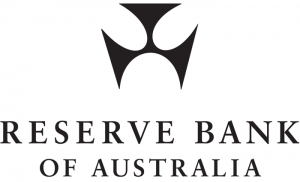 In a highly anticipated policy statement, The Reserve Bank of Australia (RBA) said that the current monetary policy is very accommodative because lower interest rates are supported by a recent decline in the Australian dollar.

According to the central bank, the Australian dollar is “above fundamental value given commodity price falls” – which could explain why the AUD/USD has fallen to lows below 0.86 for the first time since mid-2010.

Still, based on current indications, the RBA has repeated its guidance that the “most prudent course is likely to be a period of stability in interest rates.”

“The very accommodative monetary-policy settings will continue to provide support to demand and help growth to strengthen in time,” the RBA said in its quarterly ‘Statement of Monetary Policy’ published earlier today.

The Australian dollar may decline further owing to “the prospect of a rise in U.S. interest rates next year,” said the RBA. Adding, “Such a depreciation will add somewhat to growth but will also lead to upward pressure on inflation though there is a possibility the net effect will be smaller if the fall in the exchange rate is also accompanied by a larger-than-expected decline in commodity prices.”

In the latest statistical release in October, Australia added 24,100 jobs (vs. 20,300 expected) and the unemployment rate remains at 6.2% – a low level compared to other G20 countries.

According to the RBA, “Gross domestic product growth is still expected to be below trend until mid-2015.”  The bank has left its growth forecasts largely unchanged. The inflation forecast was revised, reflecting recent further depreciation in the Australian dollar. The overall outlook on inflation is unchanged and “consistent with the inflation target over the forecast period.”

Inflation statistics for Q3 were significant. Headline inflation fell from the top of the RBA’s target band down to 2.3% YoY – confirming inflation is not an issue in Australia. Furthermore, underlying inflation eased down to 2.5% YoY – below the RBA’s forecast issued in August.

The Bank of Japan’s (BoJ) unexpected announcement on October 31st that it would raise the annual target for expanding the monetary base to ¥80 trillion yen (~$825 billion) and including equity-linked asset classes, sent all yen pairs to fresh lows and the Nikkei 225 to new highs. 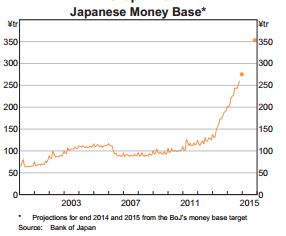 The RBA said, “There is a possibility the Australian dollar stays at a higher level than real economic fundamentals would imply because the recent announcements in Japan on monetary policy and pension-fund asset allocation increases the probability of capital flows seeking attractive yields in Australia.”

Australia’s currency remained strong even as commodity prices declined in response to better supply conditions and a slowing in Chinese energy demand growth.

China’s rate of expansion has slowed from the 10%+ rates in years gone by to a more lukewarm 7.5% as estimated by the RBA – the slowest pace since 1990. 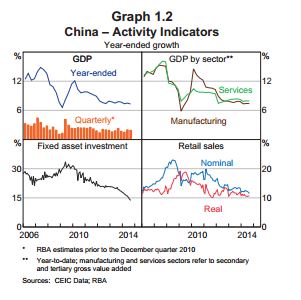 “If there was a very large and protracted decline in the Chinese property market, this would be likely to reduce demand for Australia’s exports of bulk commodities and the prices received for them,” the statement said.

Chinese GDP growth “is expected to trend gradually lower, one reason being that policy-makers may be willing to accept some
easing in growth in order to place financing on a sounder footing,” said the RBA.

A full copy of the report can be obtained here