A recent research study conducted by Deutsche Bank illustrates a distinct shift of Japanese retail investors changing their preferred trading avenue from FX to cryptocurrencies. The study goes on to attribute the recent surge in demand and pricing within the crypto industry to the rising number of Japanese investors changing gears to keep pace with the fast growing market, in an effort to maintain their desired levels of profitability that have been stagnant in their FX trading portfolios recently.

According to CNBC, Deutsche Bank’s Masao Muraki admitted that “speculation in cryptocurrency is growing to a scale that cannot be ignored.” He went on to say that “this report shows that Japanese men in their 30s and 40s who are engaged in leveraged FX trading (or who used to trade but have stopped) are driving the cryptocurrency market.”

Japan’s Domination of the FX Market

Crypto fever is in full force, and the Japanese market is no exception. In fact, if Japan takes the same role in financial trading as it has in the FX market, one could only expect the country to become a leader in the cryptocurrency market as well. 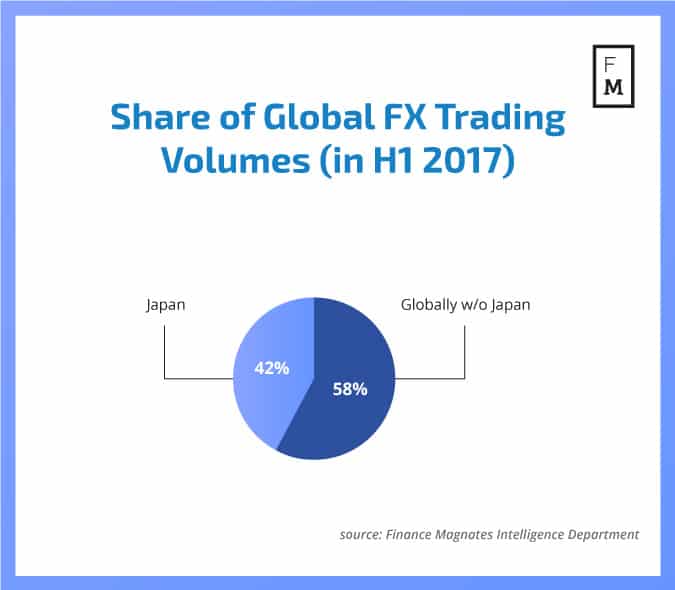 Furthermore, during Q2 2017 alone, there were over 744,000 active FX trading accounts in Japan, accounting for 28% of all active accounts across globe. These numbers clearly show the impact of Japanese investors on the FX market. If Deutsche Bank is accurate in its assessment regarding the shift of investors and consequently their funds toward the crypto market, one could only expect the impact on cryptocurrencies and their respective prices to be dramatic as well. 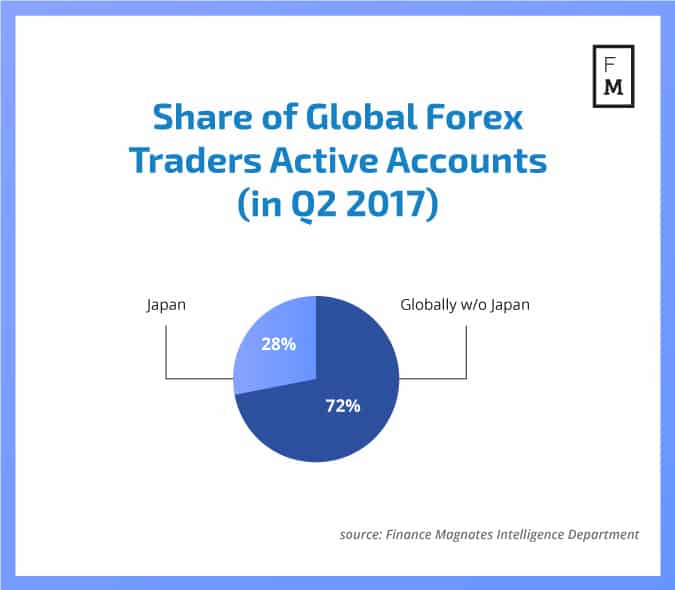 According to the Nikkei Asian Review, roughly 42% of global Bitcoin transactions in October were conducted in Japanese yen, exceeding the 36% of US dollar-based transactions. Meanwhile, the Korean won performed at just under 20%.

As the overall demand for crypto trading increases around the world (and likely within the US as well), the market share of yen-based transactions is even more eye-opening, since one can presume that the numbers have risen in all non-yen transactions as well. This would indicate an even more dramatic increase in yen-based crypto trading that can be attributed to Japanese investors.

The recent buzz surrounding cryptocurrencies is affecting investor choices all over the world. South Korea has also recently seen a shift in investor demand from stocks to bitcoin.

The Shift on a Broker Level

Some of the largest and most dominant FX brokers in Japan are beginning to shift their focus toward providing a supply of crypto-related services that will satisfy the high levels of demand that are hitting markets.

GMO Internet, which owns the FX giant GMO Click Securities, has been operating a cryptocurrency exchange under the (similar) name GMO Coin. The company offers its clients crypto trading with leverage of up to 25x.

Other large players in the Japanese market are following suit. DMM.com securities, which has overtaken a large share of the FX market, has laid out its intentions to open a crypto trading business as well as a bitcoin mining operation as early as spring 2018. Similarly, SBI Group (which owns SBI FX Trade) will be launching several cryptocurrency-related businesses in the near term, including its own exchange.

The Future of Trading

So where is this all going? We have already seen the shift begin to take place, but will it hold? While this likely is not the end of the FX industry, there is a very possible scenario in which many traders will narrow their FX exposure, in favor of alternative trading assets that are more appealing to our current technological state. In our increasingly fast changing world, new investment opportunities that offer seemingly limitless profit potential at the cost of high risk appear to be in high demand. People are less risk averse, as they want to yield substantial profits in a short period of time.

As with many other technological advances, those who are slow to adjust often stay behind. It is imperative for Japanese FX brokers to broaden their horizons into the crypto trading world, in order to ensure that they are prepared to offer their existing clients their desired product. While it is still unknown exactly how far the global demand for cryptocurrencies will reach, it is a distinct possibility that many FX brokers that fail to prepare for these changes will pay a steep price in the future.