As the conclusion of the first quarter is just a day away, a number of firms have released survey data conducted from among a sample of their respective clients, with Monex Group being the latest to announce its results.

For the twelfth time, Japan-based Monex Group has compiled data from respondents as part of its Global Retail Investor Survey which measures its customers’ sentiment based on tailored questions about the markets and global economies, including expectations for Foreign Exchange rate changes and outlook for major currency pairs.

The US dollar remained the most bullish choice according to the majority of respondents, as per figure 7. below, from both TradeStation in the U.S. and Boom Securities in Hong Kong, both subsidiaries of Monex. Figure 7 below clearly shows how the sentiment towards a bullish US Dollar was weighted heavily by nearly 40%, in terms of their expectations for the next three months.

Since the time periods of the polling were not all identical with the start and end dates, it’s possible that opinions may have varied to an additional degree, however, it’s safe to say the replies still form an accurate gauge of a sample of the company’s client base from across the reported segments, since the dates were close together and/or overlapping between the months of February and March, and the data was backed up with the number of persons who contributed the feedback.

The consensus among respondents with regards to the USD/JPY pair, shows a majority expectation of JPY-weakness and USD-strength, expected over the following three-month period. 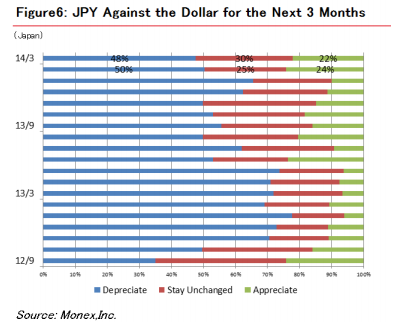 As central bank policy continues to be an important driver of foreign exchange rates as it can affect the underlying driver of flows, a question was posed to clients with regards to the outlook on the U.S. economy and recent tapering of quantitative easing by the US Fed. Nearly two-thirds of respondents appear to support the notion that the tapering will help the economy improve only slightly – as opposed to quickly or not-changing or deteriorating.

Prospects over world stock markets for the coming three months of individual investors in Japan, the U.S. and China are optimistic, according to the surveys’ findings, where a majority of respondents think world stock markets will grow. However, the percentage of individual investors that are bullish on these markets has decreased to a large extent, especially in Japan and China (H.K.), compared to the previous survey in November 2013. 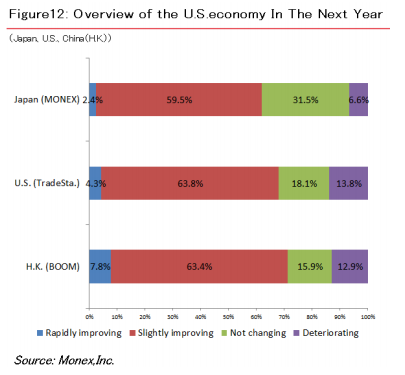 Japanese individual investors expressed growing interest in European politics and diplomatic issues, meanwhile mid-term elections in the U.S. were not expected to have a major impact on financial markets.

In addition to the brief excerpts above, a fully copy of the survey can be found on Monex’s main site. The news follows just days after the company announced its dividend forecast for its 2014 fiscal year which ended today -March 31st.

Takashi Hiroki, Chief Strategist, Monex Inc., provided an executive summary in the survey results, an excerpt of which read, “[…]the environment for both exchange rates and interest rates is identical in Hong Kong and the U.S.  Similarly, the “Real Estate” sector is less attractive to individual investors in both the U.S. and Hong Kong, which may be because the outlook for interest rates affecting the real estate market is also something the two regions have in common. The coming end of quantitative easing in the U.S. also is expected to help raise interest rates in Hong Kong, which in turn is likely to affect real estate prices in Hong Kong […]”.