The Monex Group has released today its monthly consolidated financial results for January 2014, showing weak results during the first month of the year from the Japanese broker.

The Monex Group has not yet released the exact breakdown of the financial results which are needed to explain the dramatic rise in its financial expenses and the drop in revenues. The drop in revenue especially stands in contrast due to the fact that Monex reported the month of January’s FX volumes as having reached the highest they have been in the last half year. Forex Magnates contacted the Group and will update if and when the exact financial details are released.

UPDATE: Speaking with Forex Magnates, a MONEX spokesperson explained that operating revenue includes commission fees incurred out of stock trading of the group, which has a big impact on the figure. “As to the consolidated figure, operating revenue includes valuation gain of option on convertible bond of Akatsuki FG  (+414 million yen) which is for one-time in December. January just got back to the normal.”

Also explained by the MONEX spokesperson, the considerable increased in financial expanses was due to “stock-lending fee in financial result in U.S. segment increased while revenue from that increased.”

ADALend: New Wave of DeFi Loans on CardanoGo to article >> 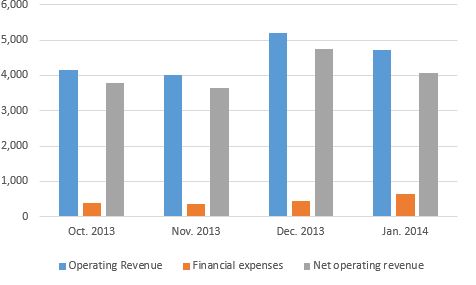 Share this article
Tags: brokers / monex
Got a news tip? Let Us Know