Research commissioned by the Financial Markets Authority (FMA) shows New Zealanders are generally aware and cognisant of plain vanilla, low-risk investments, but when surveyed about investments bearing a higher level of risk, respondents were far less informed. The survey was carried out by Colmar Brunton, interviewing 1,028 people between 27 August and 2 September 2014.

The survey asked respondents to assign a risk-level to various investments, including shares equity funds, term deposits, bonds and residential property investment. People were also asked whether these investments came with a guarantee you would get all your money back.

81% of respondents said term deposits were low risk and 73% said KiwiSaver conservative funds were low risk. Both are in fact risk-free in terms of capital gain/loss. On the opposite side of the risk scale, derivatives and contingent liability investments are considered the most risky.

When asked about higher risk investments such as shares and investment funds, 34% said KiwiSaver funds were high risk and 21% identified growth funds as low risk, according to the survey. 44% believed shares were medium or low risk.

Simone Robbers, FMA Head of Primary Markets and Investor Resources, said “People seem to understand that term deposits and fixed interest investments are lower risk investments but there was confusion around the levels of risk of growth focused investments”. She added, “There is also confusion about whether investments are guaranteed or not”.

There were few noticeable differences between age groups in their understanding or approach to risk. However when it came to residential property investment, 13% of 18-24 year olds thought property was high risk  compared to 3% of 50-64 year olds.

KiwiSaver is the most common type of investment held by New Zealanders. Term deposits and shares purchased by the investor are the next most common investments.

62% prefer steady investments offering a reliable return, compared to 39% seeking the best return, even if the value of the investment could change.

34% of those surveyed said they intend to seek financial advice in the next year. When asked where is the most likely port of call for investment advice, most respondents would choose their bank (48%) and 47% would consider friends and family. Interestingly, only 16% would consider turning to their broker for financial advice. A big statistic for the retail brokerage industry which spends large amounts of money attempting to lure and retain clients via research tools, general market advice and trade recommendations. 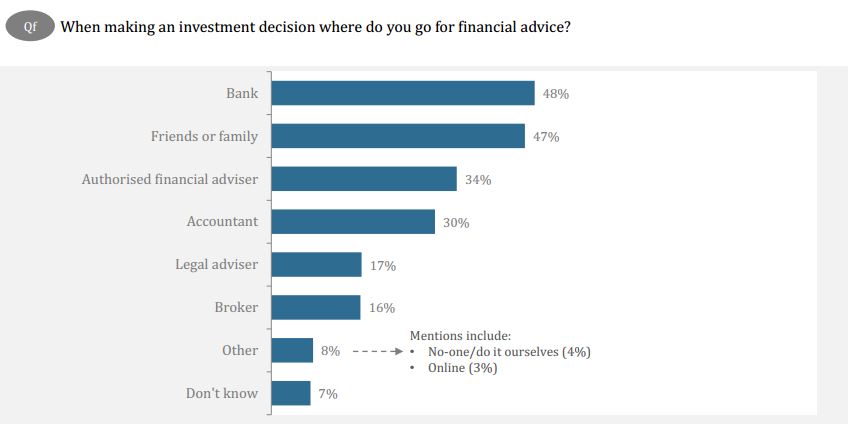 It seems that trust in the ability of banks to provide prudent investment advice after the highly publicised collapse in banking sector confidence since 2008 has to a large extent recovered – at least in New Zealand.

Share this article
Tags: fma
Got a news tip? Let Us Know