According to data from Monex Group’s investor survey conducted from the end of May through June 5th, Japanese customers were the most bullish in their expectations of stocks in their home market. In addition, according to the survey, investors were also expecting gains in US stocks for the coming three months. However, forecasts for China were for a decline in stock prices.

Explore the Japanese FX and Fintech Scene at Tokyo Summit 2015

The survey occurs as China’s Shanghai Composite Index have risen 42.6% in 2015 through the end of May, while other global stock markets have also experienced gains, with Nikkei 225 and DAX rising 17.8% and 16.4% respectively during the same period. As a result, Monex Group believes that Japanese investors are skeptical that further gains will take place in China following the strong run-up so far this year. So far, the forecasts for China appear sound, as the Shanghai Composite Index has declined over 10% after hitting a high for 2015 earlier this month. 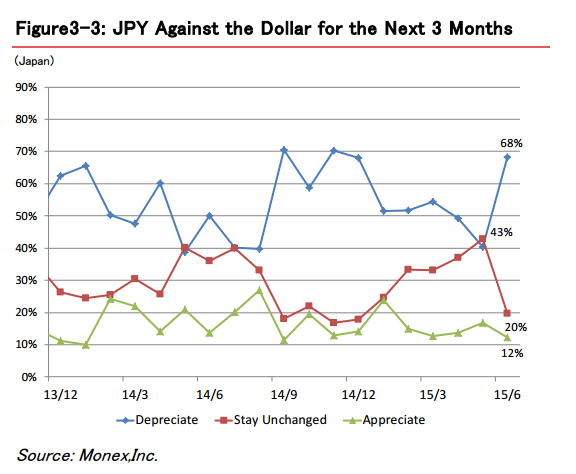 With the USD/JPY exchange rate at its highest rate since 2002, hitting a high of 125.85 earlier this month, speculation on whether the advancement will continue is a key question for Japanese businesses as well as traders. Providing their opinion, Monex Group showed that the majority of Japanese investors surveyed, expected the yen to continue its depreciation against the dollar. Overall, 68% of respondents forecasted the USD/JPY rate to rise over the next three months versus only 12% expecting it to decline.

For forex brokers in Japan, higher USD/JPY prices bode well for their businesses, as nearing the four-year move higher in the exchange rate from the mid 70’s has resulted in record trading volumes. In addition, the yen volatility has been a key driver of keeping interest in forex trading in Japan strong, even as rising stock prices in the Nikkei have been able to draw investors back to equities after a 20-year bear market.

For more information about participating at our Summit or exhibiting and sponsorship opportunities please email summit@financemagnates.com